The Premier League side kicked off the round with a 2-1 win in France with Kevin De Bruyne and Riyad Mahrez helping their team to come back from a goal down in the early minutes of the game.

And they finished what they started at the Etihad Stadium with another outstanding performance that saw them claim a 2-0 win courtesy of Riyad Mahrez after the regulation period. 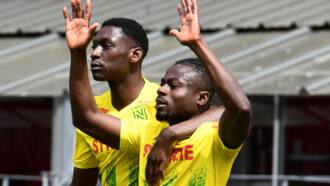 The Algerian opened the scoring in the 11th minute after firing home from a close range following a poor clearance from Mauricio Pochettino’s men, and his second came in the 63rd minute.

Phil Foden set his teammate up having started the move from the midfield and then had a quick exchange with De Bruyne before sending the ball towards Mahrez who then tapped it into the net.

Meanwhile, City have been dominant this season as they become the first English side to win 11 games in a single Champions League campaign.

With the Premier League almost in the bag, Pep Guardiola’s men might be the first English team to win a treble including the UCL after Sir Alex Ferguson did for Manchester United.

Pep Guardiola will also be making his first Champions League final appearance since 2011 when he won his second title with Barcelona.

Legit.ng earlier reported that Manchester City came from one goal down to beat Paris Saint Germain 2-1 in a hotly-contested Champions League semifinal first-leg clash at the Parc des Princes. 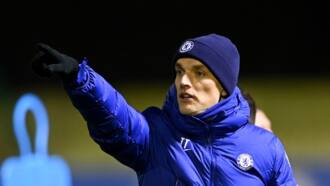 It was the classic tale of two halves as Pep Guardiola’s men completely dominated the second half after making a slow start to the game.

The Citizens turned the game on its head in seven second-half minutes as goals from Kevin de Bruyne and a Riyad Mahrez put the Citizens in an extremely comfortable position in the tie.