– Cristiano Ronaldo will not be making a return to Real Madrid

– This is according to Los Blancos president Florentino Perez

– Ronaldo has been incredible since he joined Juventus from Real

Florentino Perez who is the president of Spanish giants Real Madrid has ruled out Cristiano Ronaldo’s possible return to the Santiago Bernabeu from Juventus.

There have been talks over the future of the five-time Ballon d’Or winner as he enters into the final year of his contract with the Old Lady.

News started after Juventus crashed out of the Champions League with Real Madrid linked with a move to resign the Portugal international.

Cristiano Ronaldo joined Juventus in 2018 with the club aiming to win the Champions League, but they have not succeeded in doing so since the Portuguese joined them. According to the report on Ronaldo site, Perez claimed that he loves Cristiano as a player but added that making a return to Real Madrid is not nice.

Perez also spoke about the rivalry between Cristiano Ronaldo and Lionel Messi which has been on ground for many years.

“They are very good players, but Messi and Cristiano are history. Cristiano won’t return because he has a contract with Juventus.

“I love him a lot, but it doesn’t make sense he returns.”

Meanwhile, Real Madrid are still in the Champions League and will face Chelsea in the semifinal.

Earlier, Legit.ng had reported how Cristiano Ronaldo finally become the highest goal-scoring footballer of all-time following his strike against Napoli in Suppercoppa. 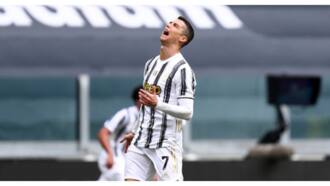 The 36-year-old has now scored 760 goals for club and country more than any other player in the history of the round leather game.

The five-time Ballon D’or winner surpassed Pele a few weeks ago and equaled Josef Biscan’s record following his brace against Sassuolo to make it 759 career goals.