Celebrated Nollywood actress, Funke Akindele-Bello, has been heartily congratulated by her darling husband, JJC Skillz, after she added a brand new car to her garage.

The doting husband took to his Instagram page with a video showing the moment they made their way to the office of popular car dealership, Lanre Shittu Motors.

Another portion of the video also captioned the moment Funke signed for the brand new car. This was followed by the excited Omo Ghetto actress hopping into the new Lexus SUV ride to check it out. 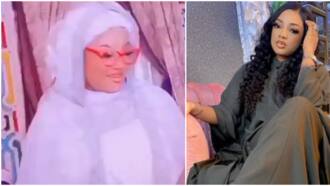 “Congratulations @funkejenifaakindele Hard work pays my darling. Congratulations for your new ride. Thank you to all the jenifan @amen_estate_lagos & @sceneonepd @omoghettothesaga And every single supporter. God bless and uplift you.”

Upon sharing the news, colleagues in the entertainment industry flooded the comment section with congratulatory messages.

“Yaaaaaaaay, congrats my people. I’m next in line.”

“Congratulations. She said it and she did it. Talk and do. @funkejenifaakindele u talk dis tin oooo.”

“Big Congrats. She deserves it.”

Meanwhile, Legit.ng previously reported that the award-winning actress declared her love for cooking on social media. 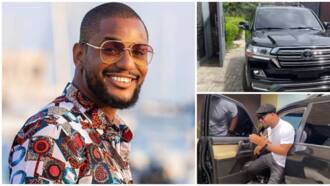 Funke shared a video of herself getting set to cook Naija styled fried rice when she made this declaration. Her husband, JJC Skillz, also attested to her food and said she won him over with her cooking.