– This was disclosed on Saturday, April 17, by the field commander of the security network, Amitolu Shittu

– Shittu recalled that the means which he called African science, has proven effective in more than one incident

Chief Amitolu Shittu, the field commander of Amotekun corps in Osun, has revealed how he and his team rescued some captives from the dens of kidnappers in the state through spiritual means.

Shittu on Saturday, April 17, disclosed that in a bid to stem the tide of insecurity in the state, the local security outfit under his leadership has applied what he described as African science.

Stating that this is the first time he will talk about this in public, the Amotekun leader in Osun narrated how kidnappers voluntarily released their victims when he and his subordinate went spiritual with the case. 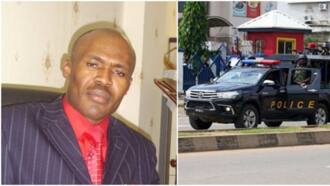 Panic as popular Nigerian pastor is found dead in church

In a statement seen by Punch, he said the victims upon their release revealed to him that the abductors confessed to being subdued by a higher power from Amotekun, hence their decision to free them.

“I talked to my people and we got in contact with the families of the victims. We experimented on something and it worked out. The victims were voluntarily released. It was African science which may be in form of prayer in our traditional way. The victims were released, the kidnappers gave them back their phones and every other item they took from them.”

Meanwhile, some armed herdsmen on Wednesday, February 10, killed a farmer identified as Lanre and a member of the Vigilante Group of Nigeria.

Both men were reportedly shot dead at Ago Sanusi along Ute Road in Owo local government area after the herdsmen laid an ambush for Amotekun officers in the forest.

A source speaking to journalists disclosed that the attack took place at about 2:00 am with the suspects fully armed with dangerous weapons, including AK 47 riffles.

The farmer who had earlier been abducted in the area was found dead in the forest. Adetunji Adeleye, the commander of Amotekun in Ondo state while confirming the death of the two men stated that the security network was alerted of the attacks.