– Arsenal remain ninth on the Premier League charts with 46 points

Arsenal salvaged a 1-1 draw with Fulham following Eddie Nketiah’s late goal to help the Gunners earn a point in the London derby.

Josh Maja’s had earlier converted a spot-kick as the Cottagers surrendered a 1-0 lead right at the death to settle the spoils at the Emirates on Sunday, April 18.

The Gunners went into the clash off an encouraging Europa League win over Slavia Prague in midweek to book a place in the competition’s semi-finals.

The north Londoners brushed off their disappointing performance in the reverse tie played at home to sweep aside the Czech Republic side in the second leg. 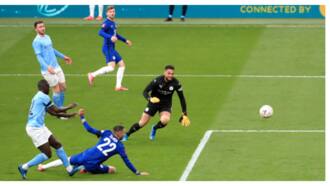 The hosts were dominant through the first half when they should have got the job done, only to see one of their goal disallowed.

They had the best chance to take the lead after just 30 seconds into kick-off through Gabriel Martinelli who flicked Alexander Lacazette’s well-placed pass just wide of the far post.

Martinelli went close again in the seventh minute after he was set up by Smith Rowe, but saw his effort saved this time.

Dani Ceballos thought he had handed the home side the lead five minutes into the break but VAR chalked off the goal following an offside in the build-up.

The visitors went on to break the deadlock minutes after the resumption for the second half when they won a penalty following Gabriel’s foul on Lemina. 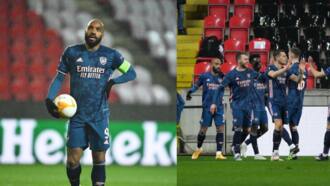 Maja stepped up to take the resulting spot-kick, crashing it high into the net to hand his side the lead.

The Gunners had a couple of goalscoring chances in the closing stages of the match but had to wait until the seventh minute of extra-time to earn a priceless draw.

Nketiah acme in through at the near post after a Alphonse Areola saved the ball into his part as he taps into an empty net.

Arsenal’s hope of European qualification next season has suffered another setback but Fulham while also be struggling for survival after taking away just a point at the Emirates.

Meanwhile, Legit.ng had earlier reported that Arsenal brushed aside Slavia Prague 4-0 to secure a ticket to the Europa League last four in what was an impressive second-leg victory away from home. 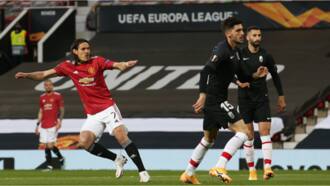 In what was expected to be a nervy night following a 1-1 draw in the first leg, the Gunners made light work of their opponent thanks to goals from Nicolas Pepe, Bukayo Saka and Alexandre Lacazette.

Within the first 24 minutes, the game was ended as a contest as Arsenal had already bagged three goals, including one which was disallowed early on.