– In a joint statement, the US lawmakers expressed fear and worry over China’s plan “to impose an authoritarian system” in Hong Kong

Joe Biden, president of the United States, has been urged to safeguard Hong Kong’s autonomy and basic freedom from the recently announced “authoritarian” plans by the Chinese government.

The appeal was contained in a joint statement by eight US senators and Representatives including a mix of Democrats and Republicans.

The lawmakers said they are “deeply concerned” by the moves to overhaul Hong Kong’s election system– what the critics and observers said will block the opposition’s bid to assume political office, Business Standard reports. 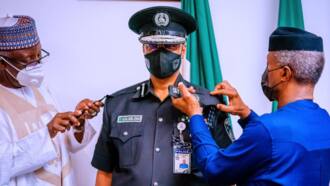 The bipartisan US lawmakers including Senator Mitt Romney, Senator Ed Markey and Representative James McGovern of Massachusetts expressed worry over an alleged crackdown on dissent voices and “fundamental human rights” in Hong Kong by the Communist Party-led Chinese government.

“We are deeply concerned by the changes Beijing announced to Hong Kong’s electoral system. These revisions will only continue to advance Beijing’s ever tightening grip on Hong Kongers’ autonomy, basic freedoms, and fundamental human rights.

“With these planned actions, the Chinese Communist Party is doubling down on its attempts to impose an authoritarian system on Hong Kong.

“Beijing is once again violating its binding international commitments under the 1984 Sino-British Joint Declaration and its obligations under Hong Kong’s Basic Law,” part of the joint statement containing the concern of the lawmakers read. In a related development, Legit.ng reported that the Biden administration described as “unproductive and cynical” the decision by China to sanction some officials of the last Donald Trump-led administration.