– The affected workers received their letters of disengagement on Wednesday, April 7

A report by Daily Nigerian indicates that some workers at the Jema’a local government area secretariat in Kafanchan in Kaduna state on Wednesday, April 7, were in a sad mood.

Legit.ng gathered that the sad event happened when no fewer than 82 staff of the council received letters of disengagement from the Kaduna state government.

The report said that the disengagement followed weeks of speculations that the state government was planning to downsize its workforce across its 23 local government areas.

Quoting News Agency of Nigeria (NAN), the newspaper said some of the affected members of staff were seen holding their letters as they struggled to fight back tears.

It was gathered that one of the letters showed the move is in line with the ongoing restructuring of the local governments in the state to reposition them for efficient service.

According to the report, one of the affected staff, who pleaded anonymity, wondered why the state government will take such an action at a trying time such as this.

“Why is the state government doing this to us now. Don’t they know the difficult times we are in as a country. People are barely struggling to survive with the little they are earning and then you decide to take the food out of their mouth.”

Another affected staff said he had accepted his fate and was looking forward to better days ahead. 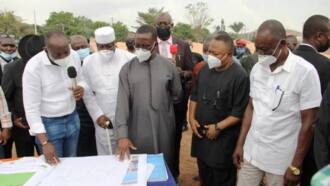 Daily Trust also reports that while speaking on his disengagement from the servic, Ajayi Chiroma, who said he had five years left in service, appealed to the state government to ensure prompt payment of affected staff benefits as stated in the letter.

“I just hope they pay us our entitlements soon enough because that’s the only thing we are going to fall back to at the end of the day.”

Micah Ngboni, the council vice-chairman, reportedly told NAN that he could not give further details other than that ‘not more than 82 people were affected.’

Meanwhile, Legit.ng had previously reported that Nigeria Labour Congress (NLC) and the Trade Union Congress (TUC) announced that they are planning to embark on a nationwide strike.

It was reported that both unions said their planned industrial action was in opposition to the move by the National Assembly to remove the issue of national minimum wage from the exclusive legislative list.