– The Lagos monarch made the allegation on Wednesday, March 3, during the commissioning of a project in the state

– Some suspected hoodlums had stormed the king’s palace, vandalised vehicles and carted away his staff of office

The Oba of Lagos, Rilwan Akiolu, has spoken on the invasion of his palace by suspected hoodlums who hijacked the #EndSARS protest in Lagos in October 2020.

PM News reported that the monarch on Wednesday, March 3, claimed that the hoodlums whom he described as #EndSARS protesters stole $2 million and N17 million from his palace.

According to the newspaper, Oba Akiolu said this at the commissioning of the remodelled Glover Memorial Hall. Legit.ng gathers that the Lagos state governor, Babajide Sanwo-Olu, was also present at the event. 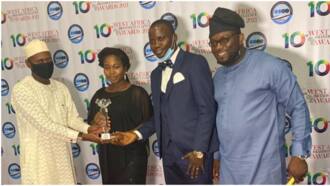 Sanwo-Olu said the completion and formal commissioning of the hall reflected his government’s determination to rebuild Lagos, revamp historic/public assets and also develop the entertainment, creative, and tourism sector.

He noted that the coronavirus pandemic and the mindless destruction which followed the EndSARS protests had a shattering impact on the economy of the state and the nation at large.

Legit.ng had earlier reported that the palace of the Oba of Lagos located at Iga Idugaran, Lagos Island, was attacked by hoodlums who vandalised vehicles and carted away several artefacts during the violence that trailed the #EndSARS protest.

The attackers seized the king’s staff of office commonly referred to as ‘Opa Ase’.

It was reported that the hoodlums who stormed the palace were the same ones who set the family home of Governor Babajide Sanwo-Olu ablaze.

Osinbajo calls for knowledge-based regulation of cryptocurrency not prohibition

After the eventual recovery of the staff of office, ritual rites were performed at Isale Eko to welcome the monarch and the symbol of authority back to his palace.

Many Nigerians condemned the sacrilege that was committed in the monarch’s palace by the hoodlums.