Manchester City are looking so comfortable at the summit of the Premier League table with 12 points better than the second-place team after 26 rounds of EPL games this campaign.

They are also on a 20 game unbeaten run and they are the first English team to achieve such a magnificent feat.

However, that cannot be said of the defending champions who are currently sixth on the log with 19 points behind City. 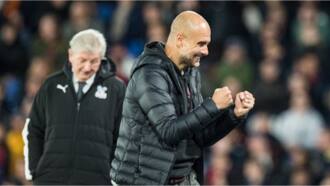 The Reds also managed to record their first league win since January 31 after beating Sheffield United on the last day of the second month. They had lost four straight EPL games before then. 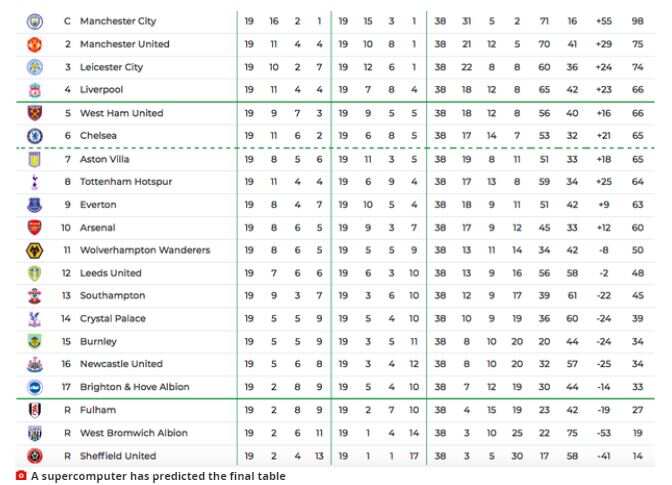 Supercomputer reveals the team’s final standings at the end of the current season.
Credit – The Mirror
Source: UGC

Meanwhile, the mainframe system predicts that Jurgen Klopp’s men will narrowly make the top four while they finish with 66 points at the end of the ongoing season.

While it is looking like the City will run away with the title, the race for the top four remains keenly contested but the computer predicts Manchester United and Leicester City will finish second and third on the log in May.

The Mirror quoting Footballwebpages.com believes they will maintain their current positions till the end of the season. Neither team is expected to come close to City in terms of points.

A staggering 32 points could separate the incoming champions from the outgoing by the time the season is over. There are just four points separating eighth-place Tottenham and 11th-place Leeds United, however, Villa are tipped to finish in seventh place at the end of the season. And this means Carlo Ancelotti and his men will miss out on European football altogether.

Spurs are predicted to finish eighth despite their impressive form in December while Chelsea will finish in sixth according to the supercomputer.

Brighton and Hove Albion will narrowly avoid the drop while Fulham, West Brom and Sheffield United will relegate.

Legit.ng eearlier reported that Super Eagles star Alex Iwobi was in action during Everton’s 1-0 victory over Southampton in the Premier League on February 1.

Richarlison scored the only goal of the game when he tucked home as early as the 9th minute in a mouth-watering fixture at the Goodison Park.

Michael Keane failed to make it two-nil in the 26th minute when he missed a penalty kick to complement his side’s early attack.