The All Progressives Congress (APC) has asked the Senate minority leader, Senator Enyinnaya Abaribe to apologise to Governor Yahaya Bello of Kogi state.

The APC made the demand via a statement seen by Legit.ng on Monday, March 1, and signed by its acting deputy national publicity secretary, Yekini Nabena.

The APC was reacting to the statement issued by the Peoples Democratic Party (PDP) asking Senator Smart Adeyemi to tender an apology to Abia state governor, Okezie Ikpeazu. 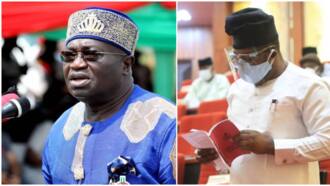 War of words: I can’t run after a mad man -Governor Ikpeazu fires back at Senator Adeyemi The APC asked Abaribe to retract and apologise for his comments against Governor Bello.
Photo credit: @NGRSenate
Source: Twitter

Adeyemi who represents Kogi West senatorial district in the Senate had called the Abia governor a drunkard while speaking during a plenary session recently.

The APC, however, stated that Senator Adeyemi was only paying back Abaribe in his own coin.

The party claimed that Abaribe who represents Abia South senatorial district in the Senate had called Governor Bello unprintable names, which made Adeyemi react on behalf of his governor.

“We are not surprised that the People’s Democratic Party (PDP) will pedal falsehood in an attempt to conceal well-known and documented truth.

“A careful perusal of the facts on ground shows clearly that Senator Adeyemi’s response was initiated by Abaribe’s unbidden and unprovoked utterances at the floor of the Senate.

“We make reference to the deplorable video by Senator Abaribe against His Excellency, Governor Yahaya Adoza Bello, which has been circulating on most social media platforms.

When both PMB and OBJ respect you, then you’re truly blessed – Fani-Kayode gushes over Yahaya Bello’s photo

“As expected, the attention of Senator Smart Adeyemi was immediately drawn to the video by well-meaning Kogites who were naturally disturbed by the falsehood of its contents.

“The three senators representing Kogi state, Adeyemi inclusive, approached Senator Abaribe, insisting that his false and malicious utterances were not just an assault on the governor of Kogi state, but to all Nigerian youth who have the ambition to serve our great country, Nigeria.

“The senators approached him in a bid to remedying an already bad situation. But Abaribe vehemently refused to heed their call for peace.”

The APC further stated that the warning issued by the PDP to Senator Adeyemi should be directed at Senator Abaribe.

The ruling party noted that Abaribe was mistaken to think he could peddle falsehood against a sitting governor on the floor of the Senate without expecting an equal reaction, adding that Senator Adeyemi’s remarks were as a result of his Abia counterpart’s utterances.

Meanwhile, Governor Ikpeazu has reacted twice to the comments made by Senator Adeyemi.

In his first reaction, Ikpeazu labelled Adeyemi’s comment as careless and dishonourable, describing him as someone suffering from dementia.

The Abia governor further said the senator is either suffering from a protracted case of mental illness or is battling with occasional fits of schizophrenia.

In another reaction, Ikpeazu said Adeyemi’s case is similar to when a mad man takes one’s clothes while bathing and runs off.

He made the comment while delivering his goodwill message at the launch of Made in Aba, an autobiography of Abaribe, in Abuja.