– However, people back at home feel jittery about the anticipated talk

– According to a source close to the family, the interview has brought up memories of the late Princess Diana’s interview with BBC

Prince Harry and his wife Meghan Markle are set to sit down for a tell-all interview with renowned queen of talk show Oprah Winfrey. But that seems to be causing some restlessness back home in the UK.

According to a source close to the family, the prince’s brother Prince William is a bit concerned about the repercussions of the interview.

Page Six reported that it has given the royal family flashbacks of how Princess Diana admitted to BBC journalist Martin Bashir that her husband Prince Charles was having an affair with Camilla Parker. 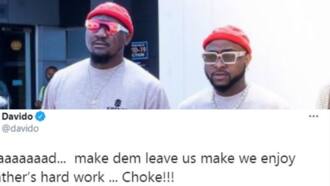 The source further said that Harry and his brother who were formerly close allies rarely speak to each other.

Apparently, the Duke of Sussex’s decision to abandon his duty as royalty seemed to leave a bitter taste in William’s mouth.

Harry and Meghan are expected to have a chat with Oprah for around one and a half hours.

Still on the Duke and Duchess of Sussex, months after opening up about their unfortunate miscarriage, Prince Harry and Meghan Markle are expecting a baby again.

The Duke and Duchess of Sussex were pictured in a brilliant pregnancy photoshoot in what would only be defined as a divine blessing.

It was a black and white image that showed Harry passionately holding his wife as her belly majestically stole the show.

The two will soon give their son Archie a brother or a sister after having to battle the loss of a child they were not fortunate to meet.

“We can confirm that Archie is going to be a big brother. The Duke and Duchess of Sussex are overjoyed to be expecting their second child,” a source close to the pair revealed to Page Six.

In other news, Legit.ng reported that actress, Kristen Stewart, recently drew reactions from fans after she made an appearance in her role as Princess Diana.

Kristen was spotted dressed as Princess Diana recently, wearing one of her signature outfits. Fans were shocked at the resemblance and some changed their minds about the casting and if she could play the role in the movie, Spencer.

When she is not reporting on celebrity lifestyle, you will find her listening to music, reading, learning new recipes.