– There are several customized items including his football table, the indoor football and a beaming chess table

Paul Pogba’s £3million home is the dream home of every player because of its incredible features, Daily Mail.

The Frenchman designed his home to relieve him of boredom with his family, especially during the lockdown period.

The 27-year-old shared a photo of his game rooms on Instagram where he spends time when he is not on the pitch. 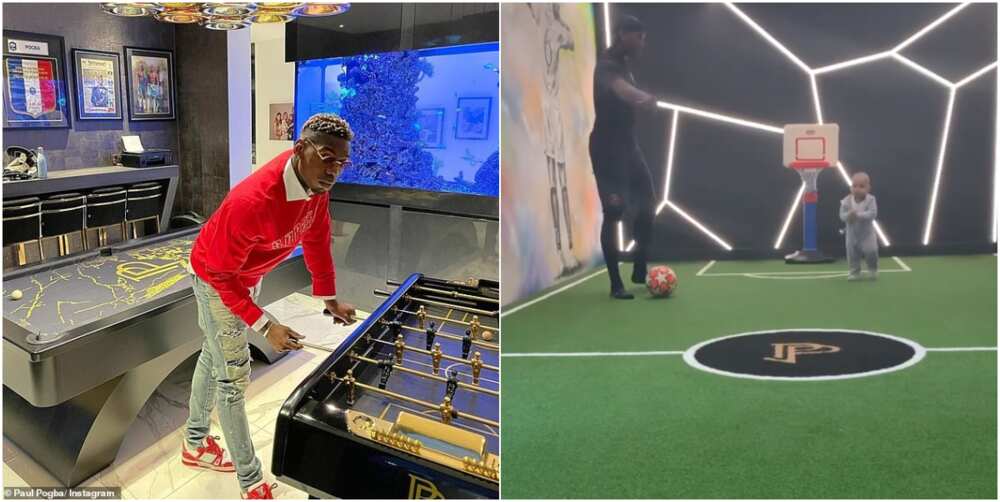 And captioned the football table:

“‘Did you know that I’m (practically) a pro on foosball?!”

The Man United star designed a wall of memorabilia from his career and a personalised pool in another part of his house.

He also has ways of entertaining his friends when they come around with an incredible fish tank wall.

Around the house, Pogba had a small custom-made football pitch constructed indoors that helps him keep fit when he is not at the Red Devils’Carrington training ground.

His initials ‘PP’ is inscribed at the center-circle of the pitch and a painting of himself celebrating a goal. He has another customized chess set with his name written in gold.

Pogba started slowly this season for United but has progressed with the rise to second on the Premier League table.

Ole Gunnar Solskjaer’s men are looking like they would win a silverware this campaign with the league, FA Cup and the Europa League at site.

Pogba is currently out on the sidelines after suffering a thigh injury during the 3-3 draw with Everton at Old Trafford.

Meanwhile, Legit.ng had earlier reported that Man United are reportedly keeping tabs on Real Madrid star Federico Valverde as a possible replacement for Paul Pogba who is unsettled at Old Trafford.