– In the first message, she told the man directly that his photographs got her glued to his account for a long time and asked that they meet

A young lady with the Twitter handle @TrueCoaster has said she got a man on the social media platform to fall in love with her after she admired him and sent a DM that captured his heart.

In a thread of photos sighted on by Legit.ng on the lady’s page, she added that the first message was sent a year ago. 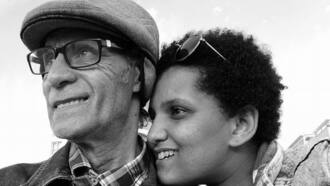 In the first DM, she ‘confessed’ that she had spent an embarrassingly long time going through the gentleman’s photographs and was super impressed.

@TrueCoaster then proposed that she would love to meet the gentleman and have some photoshoot sessions with the talented photographer.

The man then replied @TrueCoaster and stated that he was really excited to hear from her as no one had ever sent him such a heartwarming message.

From then on, the duo met up and started spending time together.

Recent photos shared by @TrueCoaster suggested that they are now dating. The young lady got social media talking after sharing how her love journey began with a man she met online.
Credit: @TrueCoaster
Source: Twitter

In an equally interesting report, a young man identified on Twitter as Celebrity Lightman with the handle @pheytevan and his girlfriend @Doveletta have caused a stir with a thread of photos showing their love journey.

In the post originally made by @pheytevan, four pictures were shared showing when they started dating as a young couple to how they got engaged recently.

Celebrity Lightman captioned the pictures with the heartwarming words, “God bless the day I met you,” and tens of thousands of people have been reacting to it.