– During the swearing-in ceremony of Governor Akeredolu, some little girls stole the show as they were seen playing with the governor

– Despite being occupied with the swearing-in ceremonies, the governor also spared some time with the kids

– With his successful re-election in October 2020, Akeredolu will serve his second term as Ondo governor till 2024

The governor of Ondo state, Oluwarotimi Odunayo Akeredolu (SAN), was on Wednesday, February 24, sworn-in for a second term after winning the October 2020 gubernatorial election.

However, amid the swearing-in ceremonies, two little girls were seen in two beautiful photos playing with the Ondo state governor. 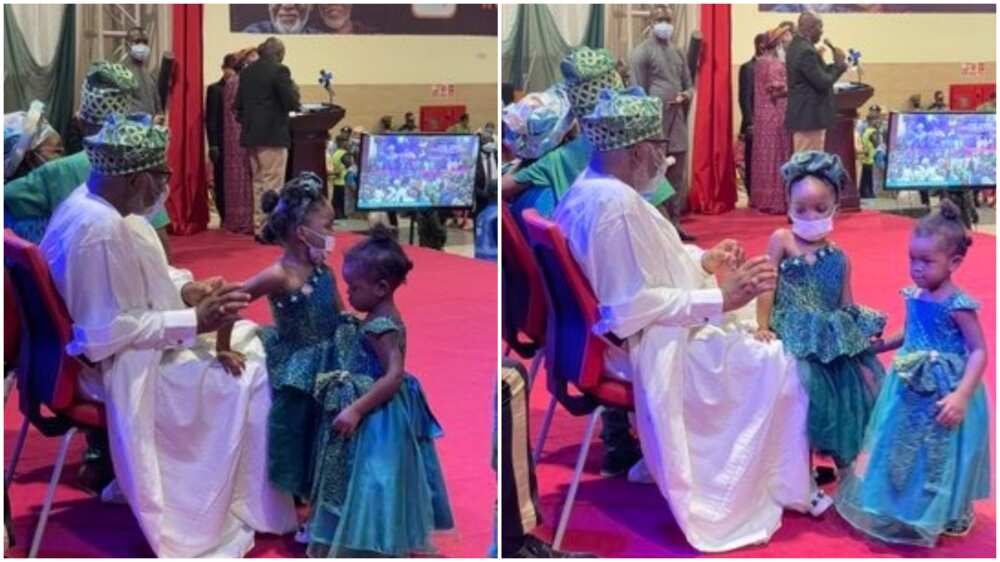 The photos were posted on Twitter by LakunleR, @LakunleKunzai, with the caption:

A Twitter user, Abimbola moses, @Dbombay_, commented that Governor Akeredolu whom he referred to as “grandpa” was also enjoying playing with the kids.

“I was watching it here, grandpa too was enjoying the play.”

In a related development, Legit.ng reported that the daughter of Mohammed Abubakar, President Muhammadu Buhari’s ex-Aide-De-Camp, Colonel Mohammed Abubakar, stole the show as her father recently presented an appreciation letter to the president.

The young girl was seen in a viral photo saluting President Buhari at the villa in the presence of her parents.

Colonel Abubakar, Nigeria’s longest ADC to a civilian president, has bowed out to take a professional course which is a pre-requisite for his next promotion to the rank of a Brigadier General. Similarly, a primary school girl has generated buzzes on social media after photos emerged of her fixing cars.

Sharing the post on Twitter along with pictures of her in action, @AD_Kwatu said the young girl identified as Khadija is a car mechanic that specialises in fixing brakes and still goes to school in spite of her work.