President Muhammadu Buhari is currently holding a closed-door meeting with Abdulrasheed Bawa, the new boss of the Economic and Financial Crimes Commission (EFCC).

The meeting is also attended by the minister of justice and attorney general of the federation, Abubakar Malami.

The president’s meeting with Buhari is coming barely 24 hours after he was confirmed as the new anti-corruption czar by the Nigerian Senate. 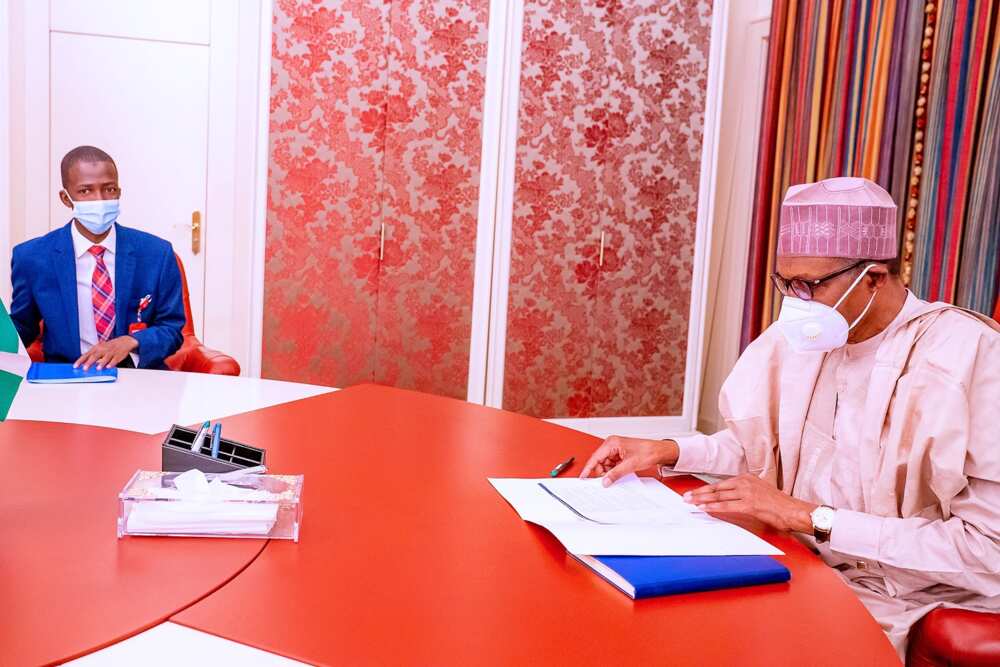 Legit.ng recalls that Bawa, a 40-year-old trained EFCC prosecutor, was appointed the substantive chairman of the anti-corruption agency.

Ibrahim Magu congratulated me on my appointment, Bawa speaks on corruption allegations

In a letter directed to the Nigerian Senate on Tuesday, February 16, President Buhari directed the upper chamber, as a matter of constitutional urgency, to confirm Bawa, saying he is “acting in accordance with Paragraph 2(3) of Part1, CAP E1 of EFCC Act 2004.”

Despite petition and criticism trailing his appointment, Bawa who made history as the first non-police officer to be appointed EFCC boss was confirmed in a substantive role on Wednesday, February 24.

The purpose of his meeting with Buhari has not been officially disclosed but there are indications that Bawa’s visit to Aso-Rock was on a thank you visit to the president.

Meanwhile, Bawa has revealed that he has no issue with the former acting boss of the anti-graft agency, Ibrahim Magu.

Bawa who disclosed this during his confirmation hearing claimed that the former boss called to congratulate him. According to him, he has a cordial relationship with Magu and he was not arrested at any time.

In a related development, Legit.ng reported that the EFCC defended its newly appointed head, Bawa amid allegation of corruption.

In a statement by the EFCC spokesman, Wilson Uwujaren, the commission absolved Bawa of any wrongdoing, adding that the new anti-graft czar has no corruption record.

Uwujaren described as “illogical” the reports that Bawa was caught in the hook of corruption and was made to face a disciplinary panel.