– On the 2023 presidency, the former governor admitted that Bola Tinubu is a leader who has the right to contest

– Fayose, however, said he has no influence on how the APC national leader can emerge as the president of Nigeria

Ayo Fayose, former governor of Ekiti state, said he has hope and belief that his party, the Peoples Democratic Party (PDP), will produce Nigeria’s president come 2023.

The former governor expressed this optimism on Wednesday, February 24, during a chat with The Punch. He added that he would love to occupy a “noble” office of the president if the opportunity comes.

Speaking on the rumoured 2023 ambition of the All Progressives Congress (APC) national leader, Bola Ahmad Tinubu, Fayose stated that he is not concerned with the former Lagos governor’s aspiration. 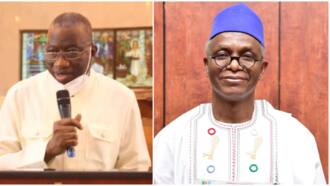 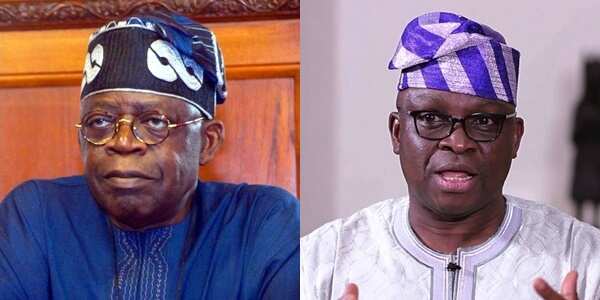 Fayose said he has not spoken with Tinubu or set his eyes on him for years.
Credit: @AsiwajuTinubu @GoAyoFayose
Source: Twitter

He maintained that for over three years he has met with Tinubu and does not know “how they are tying the relationship politically” as regards his presidential ambition.

Legit.ng understands that there have been clamours and demands especially from the southwest asking Nigerians to allow Tinubu succeed President Muhammadu Buhari when his tenure ends in 2023.

Although no official declaration has been announced in respect to Tinubu’s ambition, the former Lagos state governor has not even done much to distance himself from the media campaigns pushing him to occupy the biggest office in the country.

Fayose admitted that Tinubu is a political leader in the southwest who has the constitutional right to contest.

“Bola Tinubu is a leader in the West. It is a statement of fact.

“To the best of my knowledge, I am not a member of APC. I have no influence on how he will become if he wants to become. I have no interest; the only interest I have is that a PDP president must be put in place.”

Adeyemi, popularly known as Skimeh, made this call on Tuesday, February 23, describing Tinubu as “generalissimo of Nigerian politics.”

According to the lawmaker, Tinubu has political experience in both legislature and executive arms spanning close to three decades.