– Nigeria U17 side will play Algeria, Tanzania and Congo in Group B at the AFCON youth tournament

The Golden Eaglets of Nigeria will square up against Algeria in Group B at the U17 Africa Cup of Nations slated for Morocco scheduled to hold in July this year.

Other teams in the group are Tanzania and Congo as Nigeria prepare their quest to win the title which they won in 2001 and in 2017.

The Little Elephants of Ivory Coast emerged champions of the 2021 edition of the WAFU U17 Championship in Togo following a 3-2 victory over the Golden Eaglets of Nigeria.

At the U17 AFCON proper, hosts Morocco will tackle Uganda in Group A alongside Zambia and Ivory Coast.

In Group C are Cameroon, Senegal, Mali and South Africa; the tournament is billed for July this year.

Meanwhile, former U17 striker Victor Osimhen has been ranked the 98th most expensive player in the world according to the latest KPMG report published on the market value of 150 football stars.

The 22-year-old currently holds the status of Africa’s most expensive player after his move from Lille to Napoli last summer. 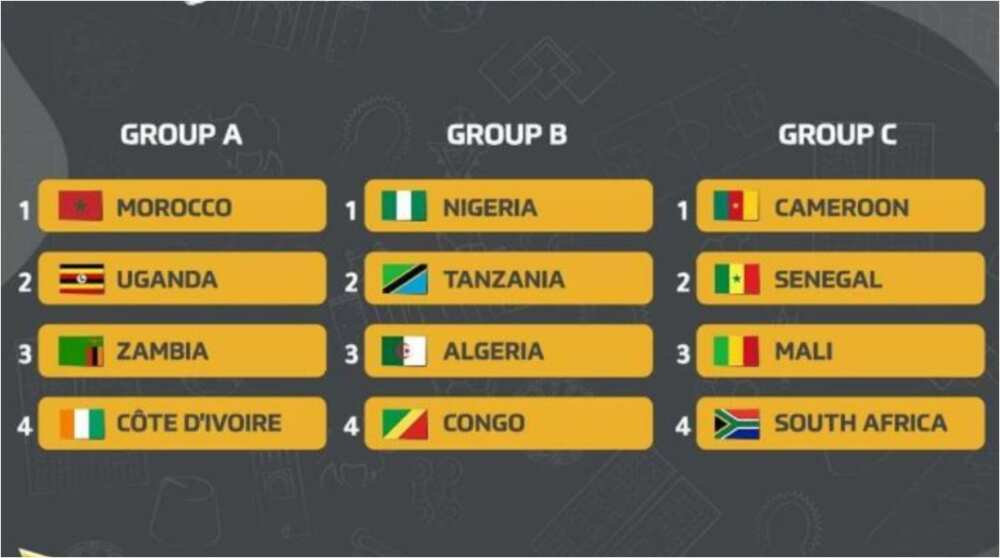 His signature cost the Italian League giants about €83 million and the report values the former youth international at €50 million (about N29 billion). And this makes him the most valued Nigerian footballer.

However, in spite of a fall of €6.8 million on his valuation from December 2020, the Nigerian still ranks higher than the duo of Paul Pogba and Kalidou Koulibaly.

However, Legit.ng earlier reported that the Super Eagles for the first time in 18 years will play their AFCON qualifier against Lesotho in Lagos at the Teslim Balogun Stadium.

The three-time African champions have been playing their matches since the Abuja National Stadium was built and later moved to the Godswill Akpabio Stadium in Uyo.

And their recent matches have been shifted to the Stephen Keshi Stadium in Delta state and recently the Samuel Ogbemudia Stadium in Benin City.

Gernot Rohr’s men will travel to Cotonou to take on Benin Republic on 22 March, 2020, before travelling down to Lagos to face the Crocodiles of Lesotho on 30 March, 2020.