Despite being a flop since he joined Spanish giants Real Madrid, Eden Hazard has been named among the top three footballers in the world at the moment by former Atletico Madrid star Felipe Luis.

The Brazilian played alongside Hazard at Premier League club Chelsea under Jose Mourinho when he signed from Atletico in a £15.8m deal in 2014.

Luis won the Premier League as well as the League Cup during the 2014-2015 season before he was told to leave the Stamford bridge club.

The defender was left in awe at Hazard’s form during Chelsea’s title-winning season, but admitted that fitness issues could have affected his form lately.

He however stated that the Belgian winger remains one of the best players alongside Barcelona captain Lionel Messi and Neymar.

“Eden along with Neymar are the best players I have ever played alongside — up there with Messi.

“He didn’t train well, five minutes before the game he would be playing Mario Kart in the dressing room.” The Belgium international suffered ninth injury since his big summer move to the Santiago Bernabeu in 2019.

And the 30-year-old has missed over 44 matches since his arrival and reportedly turned over-weight to pre-season in his first two campaigns. 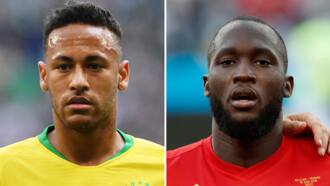 Hazard is expected to be on the sidelines following a nagging thing injury and would miss Real Madrid’s round of 16 Champions League clash with Atalanta.

Meanwhile, Legit.ng earlier reported that Paris Saint-Germain forward Neymar has been named as the best Brazilian player by Inter Milan striker Romelu Lukaku who gave his response to a fan during question and answer session on Twitter.

On a serious note, Neymar is one of the best forwards in the world considering his performances so far since he started his football career in his country, Brazil.

Over the years, Brazil as a nation has produced lots of players who have made names in the game of football with their brilliant performances.