– NLC and TUC members clashed on Wednesday, February 24, as they protested against the policies of the Corporate Affairs Commission (CAC)

– The rally, however, led to chaos as the members could not take a common stand against the commission

Members of the Nigeria Labour Congress on Wednesday, February 24, led a protest in front of the building of the Corporate Affairs Commission (CAC) in Abuja.

According to the NLC, the rally is a move against the CAC’s clampdown on union members who challenged anti-worker policies, Punch reports.

However, a clash between members of the congress and those of the Trade Union Congress (TUC) ensued following a disagreement among the unionists.

Ohaneze Ndigbo condemns use of force in Orlu by Nigerian military 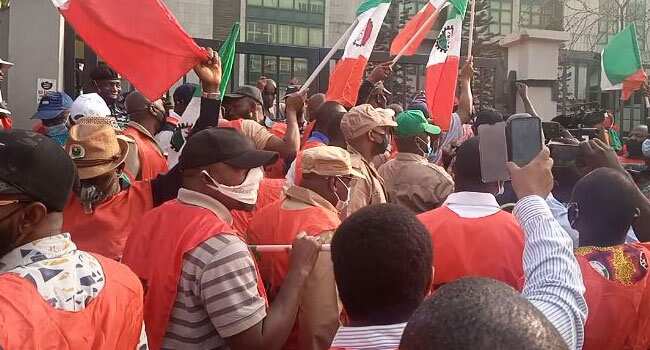 Both TUC and NLC members could not agree as they protested against CAC’s alleged anti-worker policies
(Photo: Channels TV)
Source: UGC

Meanwhile, following the failure of some state governors to start the payment of the new N30,000 minimum wage, the NLC instructed its members to embark on immediate industrial action.

The NLC disclosed this on Thursday, February 18, in a statement signed by its national president, Comrade Ayuba Wabba, and its general secretary, Comrade Emmanuel Ughoaja at the end of its National Executive Council (NEC) meeting.

Legit.ng gathered that the NEC of the NLC called the refusal of state governments to pay the new national minimum wage as an “act of criminality, betrayal of the oath of office sworn by state chief executives.

“The NEC-in-session directed all states where the national minimum wage of N30000 is yet to be paid to immediately proceed on industrial action.”