– The young man didn’t only crash date, he collected the bone straight hair, phone and slippers he bought for his girlfriend

There was mild drama at an undisclosed restaurant somewhere in Nigeria when a young man crashed a date between his girlfriend and another man.

Decked in African attire, the young man walked into the restaurant and approached his girlfriend to retrieve the items he bought for her.

The items included bone straight hair, phone and slippers. Despite the lady’s protest, the man ensured he collected the items. 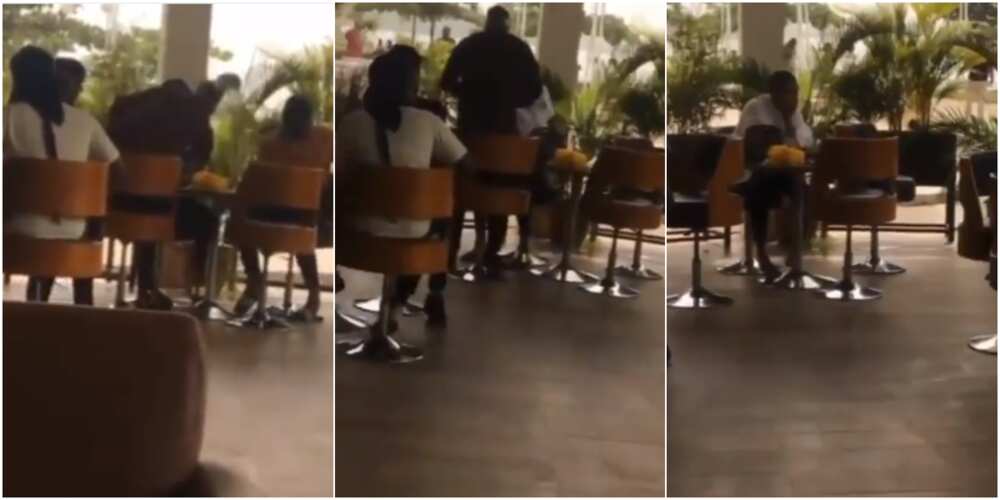 People in the restaurant were surprised when a man stripped his girlfriend of the items he bought for her because she was on a date with someone else.
Photo credit: @Postsubman
Source: Twitter

The other man with whom the lady was having a date watched as the drama unfolded but decided that there was no point in staying back.

“This King must be really Hurt. That Bone straight hair cost about 300k. If he earns 80k a month & saves 30k monthly, that means he gave up his 10 months savings to buy her that hair. What did he get in return? This king wont trust women again. Let’s remember him in our prayers.”

“I’m sure she didn’t tell the guy where she was going to OR probably she lied. And from the look of things I believe this guy traced her to this place, he might be suspecting her. In as much as the guy shouldn’t have gone that far by stripping her off her wig and shoe but…”

“Dating or not, the moment you give someone a gift it’s already theirs. Forcefully collecting it back is tantamount to theft.” 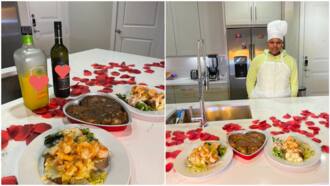 14-year-old boy cooks amazing dishes for sister and her husband to celebrate love, photos of his food go viral

In a similar news, a man has caused quite a stir on social media after taking back the television and decoder he bought for his girlfriend because the relationship ended.

In a video making the rounds, the lady in question could be seen begging the man not to go away with the gadgets, but no amount of pleading could change the man’s mind.

The young man displayed what some men would actually do in the event of a broken relationship.