Nigerian international Tyrone Ebuehi was on song for FC Twente following his strike in their 2-2 draw with Feyenoord on Sunday, February 21.

The Super Eagles defender doubled the lead for his side in the 14th minute after Brazilian forward Danilo Pereira da Silva had put them ahead from the penalty spot in the early exchanges.

It becomes Ebuehi’s debut goal for the club after he joined from Portuguese outfit Benfica during the summer.

Jen Toornstra reduced the deficit for Feyenoord in the 26th and then Steven Berghuis scored the second for Feyenoord from the penalty spot in the 66th minute to make 2-2. Also, Ola Aina for the second time this season scored in a Premier League game during Fulham’s 1-1 draw with Burnley at Turf Moor.

After a goalless first half, the Nigerian international gave the Cottagers the lead five minutes after the restart.

The 24-year-old was on hand to guide the ball into the back of the net after Robbie Brady was unable to clear his lines from Ademola Lookman’s cross.

Kenneth Omeruo was also the hero for Leganes in their 2-1 triumph over Almeria at Estadio Municipal de Butarque on Wednesday, February 17.

The 27-year-old scored a crucial goal in the 95th minute to hand the home team maximum points and helped them rise to fourth on the table with 46 points after 25 rounds of games. 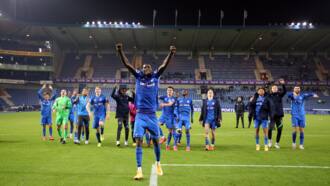 Super Eagles striker on fire in Europe, scores 23rd goal of the season against tough club

Omeruo who was on the pitch for the entire period justified his inclusion with his first goal in the Segunda Division.

He initially joined them on loan from Chelsea in 2018 but later signed a permanent deal with the Spanish club and they were unable to avoid relegation from the La Liga last campaign.

Meanwhile, Legit.ng earlier reported that Nigerian international Joe Aribo was on target for the second time within the space of four days in Rangers’ 4-1 win over Dundee United.

The 24-year-old was on target when the Scottish club defeated Royal Antwerp by 4-3 in the last 32 first leg Europa League clash in midweek.