– As it is, a former governor of the state who is the same party with Uzodinma has joined those mocking the governor with the title

Owelle Rochas Anayo Okorocha has stated that Governor Hope Uzodinma is a court-made governor who has spent his time empowering thugs in Imo state.

Okorocha, the current senator representing Imo west senatorial district and former governor of the state, has been at loggerheads with Governor Uzodinma.

The duo are members of the ruling All Progressives Congress (APC) but remain political rivals despite being in the same party. 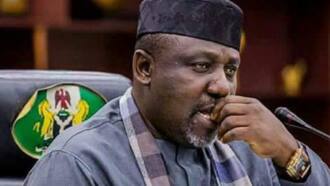 Police reveal fresh details on Okorocha, say ex-governor may be charged to court

Addressing his supporters on Monday, February 22 in Owerri, the former governor accused Uzodinma of fanning the embers of disunity in the state through state-sponsored thugs.

Vanguard quoted him as saying:

“Governor Hope Uzodinma is moving in a wrong direction that he may not end up well with. With what happened yesterday, Hope simply displayed criminality in governance, thuggery in governance.

“He is creating unnecessary tension when there is no need for it. Imo today is very unsecure for the first time in nine years. Every day people are being killed in this state, people are being intimidated by the governor and his thugs.

“That is not the way to do it. A governor, who came through court, should know how to respect the rule of law. If a matter is in court you cannot use executive power against the court power. But this is what Hope Uzodinma is doing in this state.” 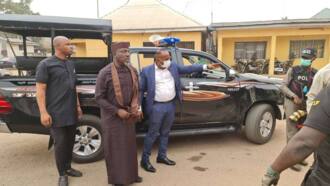 Okorocha’s aide, 13 others arraigned in Owerri over invasion of hotel

Recall that the Imo government sealed off an estate located in the state capital, Owerri, allegedly owned by the wife of the senator, Mrs. Nneoma Nkechi Okorocha.

Senator Okorocha had earlier claimed Governor Uzodimma sent over 1,000 armed thugs to attack him over the weekend.