– Many thought it looked real, others commended his initiative and talents

A Nigerian man has shown that waste materials can amount to something tangible and amazing when it is touched by a creative and resourceful mind.

Taking to Twitter, @aozforum shared photos of his artwork of a ‘moving’ crocodile he created from plastic waste. He posted three frames that highlighted how he made the amazing piece from start to finish.

“Waste is not waste rather a resources!” 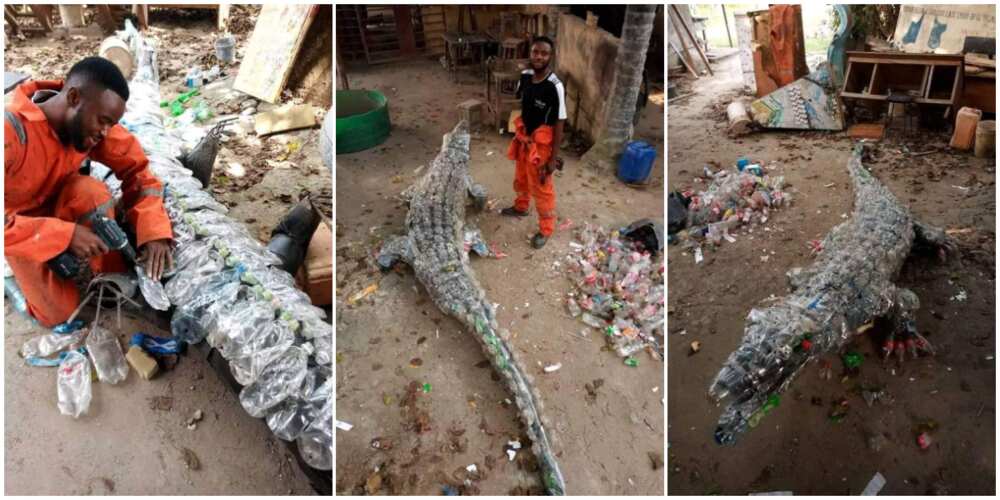 His message was passed and massive reactions follow such a rare form of talent exhibition. The tweet which had got over 9k likes left social media users awestruck.

Many opined that the artwork was so good that it could be mistaken for an actual live crocodile, others went as far as recommending that it’d be a good piece for children’s parks.

“Thought it was real in the first frame and I was like how crazy is this guy?”

“We can have a theme park where some of these recycled items are artistically sculptured and displayed.”

“The first frame got me thinking it was real

“So I quickly slide through thinking something happened.”

@Makatjane3 took to Twitter to share how he goes through dumpsites and trash to find old bottles he uses to turn into decorative pieces for people’s homes. He also shared pictures of his beautiful work with his impressed followers.

The post quickly gained traction as thousands of locals were left impressed by the man’s hard work and determination. Many of them took to the comment section to share their compliments and thoughts.