– The striker recently joined Al Shabab of Saudi Arabia, and Rohr hints that regular play could earn him a call up

Super Eagles coach Gernot Rohr has hinted that Al Shabab of Saudi Arabia striker Odion Ighalo could be welcomed back into the Super Eagles anytime soon.

The striker called it quits with the national team right after inspiring Nigeria to a third-place finish at the 2019 AFCON tournament in Egypt where he emerged as tournament’s top scorer.

During the qualifiers for the competition, Ighalo scored a total of seven goals- the most by any player and found the net against Burundi in the group phase; Cameroon in the round of 16; Algeria in the semi-finals and Tunisia in the third-place playoff.

He then announced his retirement before he received a loan offer at Manchester United from his Chinese Super League side Shanghai Shenhua.

Having completed his loan spell with the Premier League giants, Ighalo was snapped up by Al Shabab recently and Rohr has said the door is still open for the player.

“Playing regularly in Saudi is not a reason to eliminate a good player from Super Eagles,” the 67-year-old experienced coach told NationSport.

Rohr also expressed delight with Nigerian strikers making waves with their European clubs, adding he was scouting on all fronts ahead naming a squad for the forthcoming 2021 AFCON qualifiers against Benin and Lesotho.

“We are looking in all directions! Cheers from Abuja.” 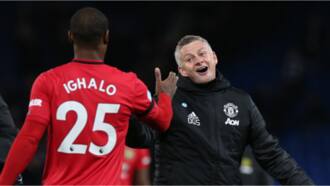 The Saudi Arabian side Al Shabab took to their official social media page to confirm the arrival of the Nigerian football legend Ighalo.

It was gathered that the former Osun United striker signed a two and a half year deal with them with option of him increasing the deal subsequently.

Meanwhile, Legit.ng earlier reported that Napoli manager Gennaro Gattuso has leapt to the defence of Nigerian star Victor Osimhen who seems to be struggling at the Italian club lately.

The Super Eagles star was introduced in the 53th minute against Genoa in a Serie A clash but failed to inspire the club as they lost 2-1 on Saturday, February 6.

Recall that Osimhen suffered a dislocated shoulder while on international duty in November last year which consequently saw him out of action for close to three months.