Chelsea clawed their way into the Premier League top-five following their 2-1 victory over Sheffield United at Bramall Lane.

Mason Mount and Jorginho scored from the penalty to give the Blues their third win under new manager Thomas Tuchel.

There were dramatic scenes in the match as one of them was a penalty decision handed to Sheffield by referee Kevin Friend and Ben Chilwell fouled Max Lowe in the box in the 11th minute. 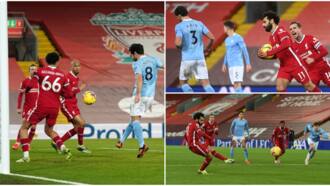 But after a look at the VAR, there was an offside spotted before the incident occurred and the penalty decision was overturned.

Timo Werner came close later in the half as he tipped the Sheffield goalkeeper Aaron Ramsdale before a goal-line clearance was made.

Chelsea then took the lead in the 43rd minute as Werner squared a pass for Mount who side-footed home to make it 1-0.

The Blades came back into the game ten minutes after the restart as Antonio Rudiger carelessly put the ball into his own net after a miscommunication with goalkeeper Edouard Mendy. 1-1 it was.

A minute later, Sheffield also made a defensive blunder after a misjudged back-pass meant for Ramsdale was stolen by Werner who was brought by the keeper to win the Blues a penalty.

Jorginho stepped up and converted the resulting spot-kick in style and put Chelsea back in the lead. 2-1 it was.

Chelsea held on for the win as they move in the top five positions on the Premier League log.

Meanwhile, Legit.ng had earlier reported that Tottenham Hotspurs returned to winning ways in the Premier League following their 2-0 win over West Bromwich Albion.