– According to the group, the wealth of experience of the chiefs will be harnessed for the fight against Boko Haram

Youths under the auspice of the Congress of Progressive Yoruba Youths (CPYY) on Friday, February 5, commended the nomination of the immediate past service chiefs as non-career ambassadors by President Muhammadu Buhari.

The youths described the past service chiefs as worthy ambassadors who have been nominated to push the country forward.

In a statement signed by the group’s leader, Kolawole Salau, and seen by Legit.ng, CPYY urged the National Assembly to confirm the nomination of the former service chiefs as soon as possible.

The youth group said the former service chiefs are truly Nigeria’s ambassadors and that their nomination is a reward for excellence and meritorious service to the country. The group said the service chiefs are assets to the country
Photo: @NGRPresident
Source: Twitter

The statement read in parts:

“We make bold to say since 2009 when acts of insurgencies and insurrections became a national and global security challenge, the immediate past set of service chiefs really made Nigeria proud.”

He also said the newly appointed non-career ambassadors would no doubt bring their wealth of experience to bear on influencing the global community in assisting Nigeria to address the scourge of terrorism permanently.

Meanwhile, Legit.ng previously reported that President Buhari had forwarded the names of the immediate past service chiefs for confirmation as non-career ambassadors.

The lawmakers of the Nigerian Senate are therefor expected to schedule a screening of the newly appointed ambassadors for further confirmation. 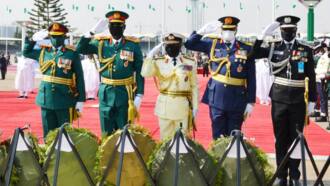 Also, some Nigerians in the diaspora have said that the nomination of the past service chiefs will build an international consensus against the ongoing anti-terrorism fight.

The group, Nigerians in Diaspora Monitoring Group (NDMG) also commended the president for recognising the effort put in by the service chiefs during their tenure.

Similarly, a group, Nigeria First on Thursday, February 4, alleged moves by some individuals and international organisations to launch a smear campaign against the immediate past chief of army staff, Lieutenant General Tukur Buratai (rtd).

Nigeria First, in a statement signed by its secretary-general, Augustine Adie, and seen by Legit.ng the individuals also plan to assassinate the character of some notable Nigerians including other service chiefs who retired alongside Buratai.