– A clip went viral during the week, showing APC members in Kwara state exchanging blows and throwing chairs at each other

– The embattled chairman of the party, Bashir Bolarinwa, who paid them a visit, expressed joy that they were responding to treatment

Five chieftains of the All Progressives Congress (APC) who sustained serious injuries during the recent violent attack at the stakeholders meeting of the Kwara state chapter have been hospitalised.

They are receiving medical attention at undisclosed hospitals in Ilorin, the state capital, This Day reports.

Among those hospitalised are: 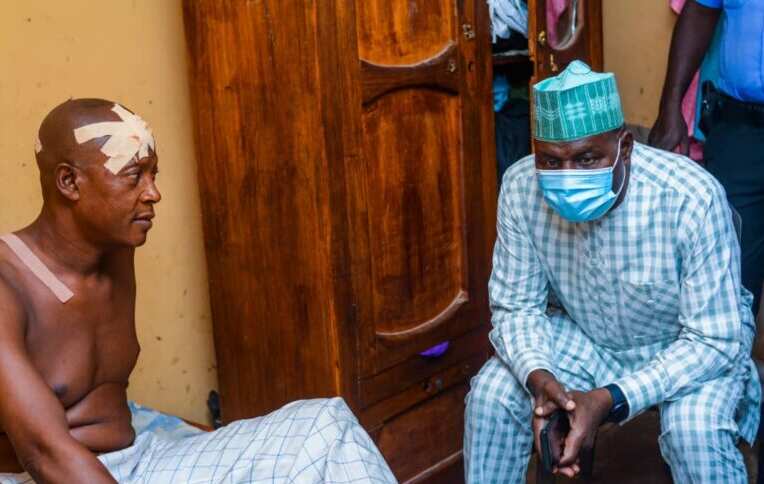 “I am happy that they were all upbeat and reacting to treatment.”

Legit.ng had reported how violence erupted at the Banquet Hall of Government House, Ilorin, ahead of the party’s membership registration exercise.

Party members were seen throwing chairs at each other as they engaged in a free for all brawl.

The Kwara chapter of the party has been embroiled in crisis over the leadership position.

There is said to be a power tussle between the Kwara governor, AbdulRahman AbdulRazaq and the minister of information and culture, Lai Mohammed.

This has created two factions of the party in the state, with one loyal to the governor, and the other to the minister.

The crisis took a turn for the worse after the removal of Bolarinwa as the party chairman.

According to Premium Times report, the fracas at the Government House started after supporters of AbdulRazaq stopped Bolarinwa and his supporters from entering the Banquet Hall.

This degenerated to exchange of blows and throwing of chairs between the factions as seen a video that went viral on Wednesday, February 3.