Lionel Messi and Cristiano Ronaldo have been named in the World Team of the Decade according to the International Federation of Football History & Statistics, SunSport reports.

The duo have literarily made the last ten years their own splitting a staggering 11 Ballon d’or titles between themselves with Messi having six while Ronaldo holds five.

IFFHS favours more Real Madrid stars in the team with present and past Los Blancos stars dominating the XI.

In fact, four of the 11 players named in the World Team of the Decade are still current members of Madrid as Marcelo gets the nod at left-back, with Toni Kroos and Luka Modric both in midfield. 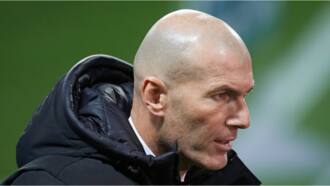 Ronaldo is one, having been on the books of Real Madrid until his 2018 exit, when he joined Juventus in a £99million deal.

Barcelona have two legends of the game in the team, with Lionel Messi and Andres Iniesta making the cut. Atletico Madrid manager Diego Simeone emerged No.1 in the top 20 greatest managers of the last decade according to the International Federation of Football History and Statistics (IFFHS).

Simeone became Atletico manager in 2011 and was able to break the Real Madrid-Barcelona dominance of Spanish football as he tutored his side to the La Liga during the 2013-2014 season.

Meanwhile, Legit.ng earlier reported that Argentina legend Lionel Messi has edged other superstars to the World’s Best Playmaker of the decade title, with fiercest rival Cristiano Ronaldo not making the top 10.