– Phil Jones is yet to feature for Man United for over a year now, with injuries taking a toll on him

– The centre-back will now battle for a place in the team with Maguire, Lindelof, Bailly and Tuanzebe

Man United defender Phil Jones has made a return to the club’s squad after he was named in the side’s squad for Europa League.

The Red Devils are set to face La Liga outfit Real Sociedad in the round of 32 later this February for a chance to reach the last 16.

And to ensure he has enough squad depth, Ole Gunnar Solskjaer has surprisingly added Jones to his squad. Phil Jones was widely linked with an exit during the January transfer window but survived the axe. Photo by Gareth Copley.
Source: Getty Images

The English defender has been out injured and has not made an appearance for the Old Trafford dwellers for more than a year now. 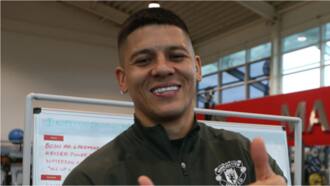 The centre-back was initially linked with a move away during the January transfer window but miraculously survived the axe and stayed.

However, reports suggest the 28-year-old was drafted back in the team as Solskjaer looks to bulk up defensive numbers during the competition.

The Norwegian now hopes Jones can rediscover his form and shake off his injury setbacks to leave a mark.

New signing Amad Diallo is also due to join the senior team for Europa League, weeks after he completed his move from Atlanta.

The 18-year-old winger has already given fans a glimpse of what to expect after he shone over the weekend for the U23s against Liverpool.

During the match, the Ivorian scored a brace to inspire United to a 6-3 win over their arch-rivals.

Meanwhile, Legit.ng earlier reported that Sergio Ramos appears unrepentant about leaving Real Madrid at the end of his contract with the Spanish League giants.