– FG said by 2025, 30% of vehicles in Nigeria will be electric cars as the country will not be left out of modern-day innovation

The federal government says there are ongoing plans to make at least 30% of all the motors and vehicles in the country electric ones by 2025.

Jelani Aliyu, the director-general of the National Automotive Design and Development Council (NADDC), expressed this enthusiasm on Friday, February 5.

Speaking at the unveiling of Nigeria’s first locally assembled electric car, Hyundai Kona, Aliyu said Nigeria would not be left out in the transition from fuel-powered vehicles to electric cars, adding that the electric cars have come to stay.

The NADDC boss said the Stallion Group, which led the innovation in electric cars in Nigeria, has invested about $300 million in Nigeria. 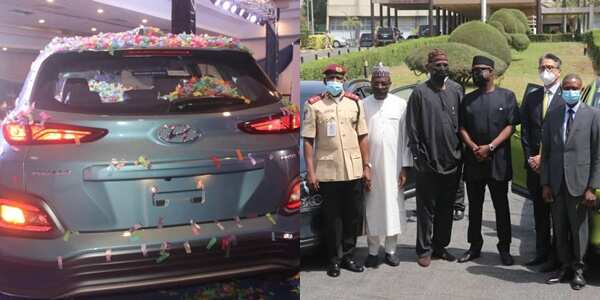 Aliyu Nigerians to embrace new technology which according to him has empowered businesses and energized private sectors through industrialization.

Also speaking at the event, the federal minister of works and housing, Babatunde Fashola SAN, commended the commitment, persistence, teamwork and collaboration of the Stallion Group and NADDC that brought about the achievement, adding that the Ministry of Works and Housing would continue to support the automotive industry in Nigeria.

Earlier, Legit.ng reported that Lagos government distributed 51 Sports Utility Vehicles (SUVs) to the state judges in a gesture aimed towards helping the state judiciary to perform its functions.

Distributing the cars to the judges on Wednesday, September 23, at the Ikeja high court, Governor Babajide Sanwo-Olu stated that it is the vision of his government to build a working relationship with the judiciary system.

The governor, who also presented eight houses to the jurists, explained that effective executive-judiciary relationship will bring balance to the government.

Sanwo-Olu also promised that the judiciary system in Lagos state will be massively supported by the government in order to ensure fast delivery of justice, adding that the bench is the “bedrock of the society.”