– Tinubu’s reported presidential ambition has featured prominently in the media

Governor Neysom Wike of Rivers state has played down the possibility of Bola Tinubu emerging as president of Nigeria in 2023.

The governor told journalists on Thursday, February 4, that the presidency will be way out of the reach of the national leader of the ruling All Progressive Congress (APC) in the next general elections.

According to The Guardian, Wike advised the politician to forget about pursuing the presidency and channel his energy to other profitable ventures. 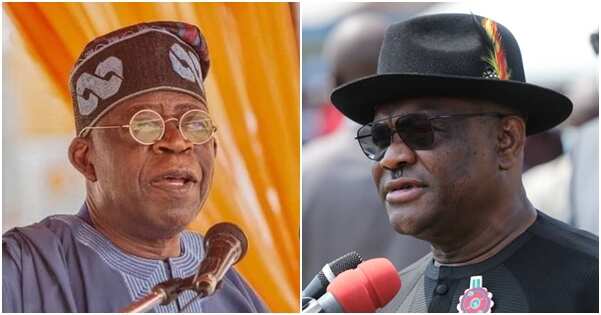 He made the statement in Yola, Adamawa state, while on an inspection tour of projects being executed by Governor Ahmadu Fintiri. “With the massive development going on in PDP states and the massive corruption going on under APC regime, it is no longer news that PDP is on its way back to chase out invaders and lawfully take over its house and pilot Nigerians to the promised land.”

Meanwhile, the APC member representing Osun West Senatorial District at the National Assembly, Senator Adelere Oriolowo, has declared that Bola Tinubu’s quest to become the president is a Nigerian agenda.

He disclosed this while speaking on issues affecting his home state, Punch Newspaper reports.

The senator insisted that the plan to support Tinubu is not only limited to the southwest. He went on to emphasise that the development being experienced in Lagos state started with him.

Oriolowo added that Tinubu has the credentials to rule Nigeria and he is capable of bailing the country out of her present predicament.

In another news, the possibility of a Bola Tinubu presidency in 2023 is gaining momentum as stakeholders in the southwest geopolitical zone organised a summit to support the political move.

According to Daily Trust, the stakeholders insisted the region must produce President Muhammadu Buhari’s successor just as they pushed for the emergence of the APC leader, Bola Ahmed Tinubu.

Legit.ng gathers that the summit was organised in Ibadan, Oyo state capital, by a group tagged Yoruba Patriots Movement.