– The Ooni of Ife, Oba Enitan Ogunwusi, has said Sunday Igboho’s allegations against him are irresponsible

The Ooni of Ife, Oba Enitan Ogunwusi, has reacted to the derogatory comments made against him by the acclaimed Yoruba rights activist, Sunday Adeyemo, popularly known as Sunday Igboho.

Premium Times reports that the first-class monarch who spoke through his spokesman, Moses Olafare, described Igboho’s comments as irresponsible.

Olafare also said the palace will appropriately handle the threat of violence made by Igboho against the monarch. 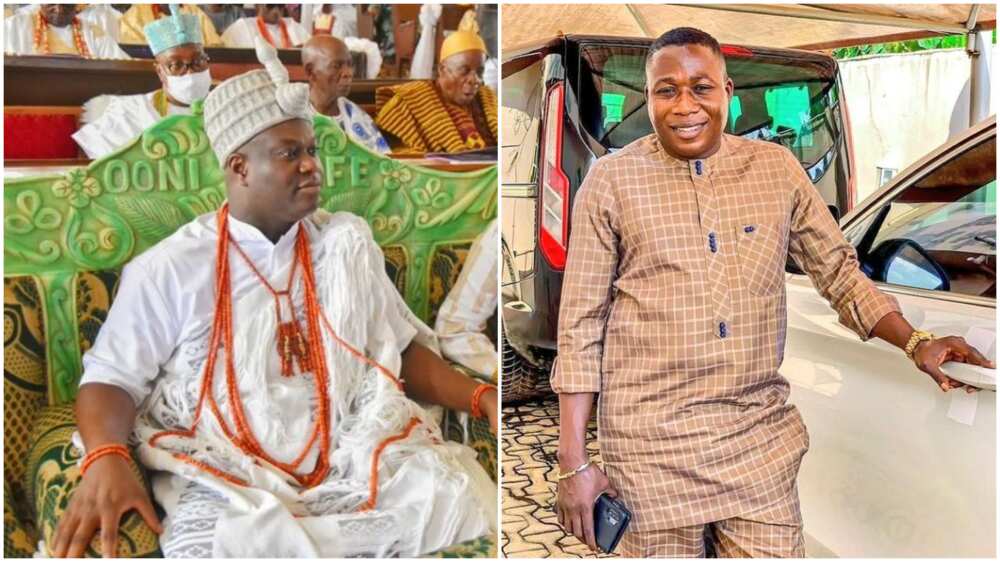 Ooni of reacts has reacted to Sunday Igboho’s allegations against over the herdsmen crisis in the southwesst.
Photo credits: @OoniAdimulaIfe, @SundayIgbohoo
Source: Twitter

Igboho had during a virtual town hall meeting on Wednesday, February 3, with Nigerians in the diaspora, attacked Ooni and some southwest political leaders.

He specifically accused the respected Yoruba monarch of collecting dollars from President Muhammadu Buhari when he recently visited the Presidential Villa recently.

The Yoruba warlord also threatened to waylay, open fire on the Yoruba leaders or visit and vandalise their properties.

Olafare said Igboho’s allegation that the monarch collected money from the president is not only irresponsible but also lacks substance.

“If you make unfounded allegations and then you want to use allegations to further justify your claims as the generalissimo of the race, it is up to the public.”

The Ooni’s spokesman said Igboho was going overboard in his conduct and that he should not believe that he is bigger than the authorities.

On the threat of violence, Olafare said though the palace is not ready to report any matter to security agents, it is believed that the security agents who must have seen the video will act appropriately.

Igboho became more popular outside his usual circle when he issued quit notice to some Fulani herdsmen in Igangan town Oyo state after accusing them of being responsible for the criminal activities in the area.

The development led to some pockets of violence which led to the relocation of the head of the Fulani community in Igangan to Kwara state.

Igboho’s house in Ibadan was also burnt amid the crisis, though it is yet to be confirmed by the police if the incident has anything to do with the herdsmen.

Meanwhile, Igboho has asked the Ooni to forgive him over a statement he made about the monarch’s visit to Buhari.

Although he denied insulting the monarch, he begged for forgiveness from the monarch if whatever he said appeared as an insult.