Governor Hope Uzodinma of Imo state has declared that Nigerians will vote for the ruling All Progressives Congress (APC) again in the 2023 general elections.

Uzodinma made the comment during an interview with Channels Television on Wednesday, February 3.

“Given the activities and achievements of President Muhammadu Buhari, there is no doubt that Nigerians would vote APC again.” “In your wildest imagination! Keep dreaming!”

“If this is a curse, I decree that it shall not stand, neither shall it be established.”

Meanwhile, the Deputy Senate President, Ovie Omo-Agege, has said that access should be given to members of the Peoples Democratic Party (PDP), willing to join the APC in the ongoing membership registration exercise of the ruling party.

Omo-Agege made the comment on Tuesday, February 2 in his country home in Orogun, Ughelli North local government area of Delta state.

According to him, the essence of the exercise is to rejuvenate the party in preparation for future elections hence the need to get more members into the APC fold.

He further counselled APC chieftains in Delta state and beyond not to discriminate against anyone either within or outside the party during the exercise. 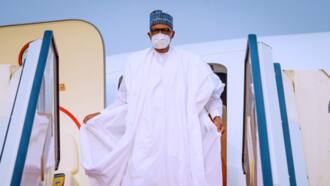