Messi is in the final year of his contract at the Camp Nou and the Ligue 1 champions are among the clubs lobbying for the Argentine’s signature.

PSG’s Sporting Director Leonardo said in January that the door is opened to the 33-year-old: 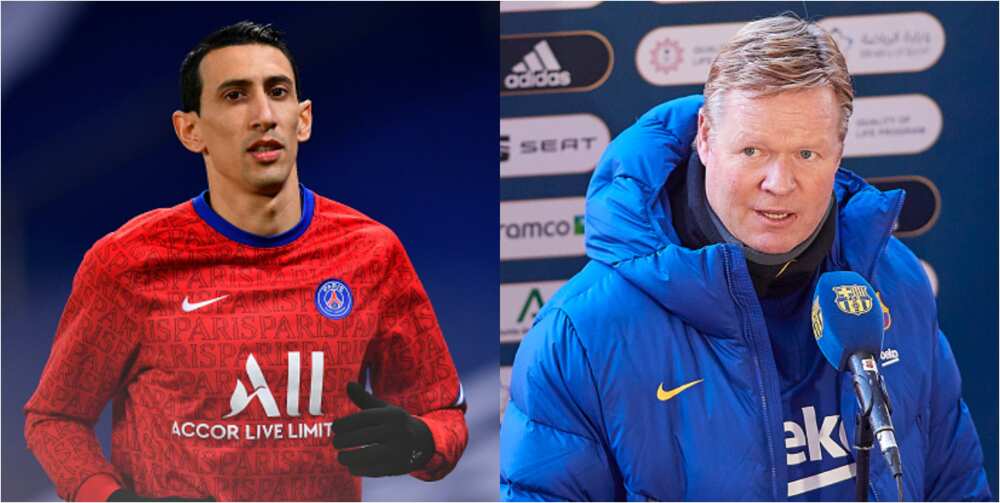 “Great players like Messi will always be on PSG’s list. But this is of course not the time to talk about it, or to dream about it.”

Di Maria then said that he would be willing to play alongside his countryman PSG defeated Nimes 3-0.

“There are many possibilities. We have to be calm and things will develop.”

Those comments did not sound well in the ears of Koeman as he claimed Di Maria was disrespectful.

The Dutch boss said after Barca’s 5-3 win over Granada in the Copa del Rey:

“It seems to me a lack of respect. Someone can be wrong in saying something like that.

“It is not fair, I do not think it is respectful towards Barca to speak like that of a player who is ours. So many people from PSG talk a lot about Leo, who plays for Barca.

“Besides, we have a tie against them.”

Meanwhile, Legit.ng had earlier reported that Lionel Messi took his free-kick haul to 55 following Barcelona’s 2-1 win over Athletic Bilbao in the past weekend, The Sun.

But despite his impressive number of goals from direct free-kicks, Messi is still behind several players in the list of top ten players who have scored directly from a set-piece.

The Barcelona captain ranks higher than his fiercest rival Cristiano Ronaldo in this department. The 33-year-old is ranked 11th among the best free-kick takers in the world.