– US singer, Rihanna, has used her Twitter platform to raise awareness about the farmers protest in India

– Similarly, climate and environmental activist, Greta Thunberg, also used her online platform to draw attention to what is currently going on in India

– However, the contributions from the two foreigners sparked mixed reactions on social media

International music star, Rihanna, has joined a few others who have used their large social media following to amplify the voices of protesting farmers in India.

The musician in a post shared with her 101 million Twitter followers on Tuesday, February 2, posed a question as to why adequate attention is not being given to what is going on in India.

“why aren’t we talking about this?” The Diamond crooner wrote.

Rihanna also made sure to use the #FarmersProtest tag while tweeting on her page. In addition, the pop star shared a link to a CNN report which details the ongoing events in India. In the same vein, climate and environmental activist, Greta Thunberg, also told her 4.7 million Twitter followers that she supports the protesting Indian farmers.

“We stand in solidarity with the #FarmersProtest in India.”

However, the intervention by the two foreigners sparked mixed reactions from members of the online community.

“My country is proud of our farmers and knows how important they are, I trust it will be addressed soon. We don’t need an outsider poking her nose in our internal matters!”

Also tweeting back at the US singer, Indian actor Gajendra Chauhan wrote:

“Mind your own business. This is my country. Don’t dare to our internal matter.” 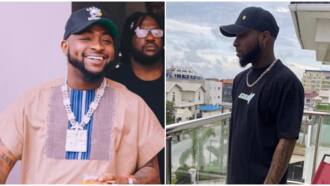 In a different story about Rihanna, Legit.ng previously reported that the singer made a fan’s entire festive season when she surprised him by being at a petrol station.

Rihanna went home to Barbados for the holidays and shocked a fan when he bumped into her. The fan posted a video of the encounter online and said that the encounter had made his Christmas come early.