The Nigerian Football Federation have sent their condolence message to Super Eagles attacking midfielder John Ogu over the tragic death of his lovely mother.

Football fraternities in Nigeria were on Monday evening, January 25, thrown into serious mourning when John Ogu confirmed the death of his mother on his official twitter page.

John Ogu stated emotionally that ”today is the worse day of my life” while posting an heartbreak emoji on his social media page.

According to the communication made by the Nigerian Football Federation, they enjoined John Ogu to take heart and prayed for his late mother to rest in peace. ”Our thoughts and prayers are with Super Eagles midfielder John Ogu following the passing of his Mom. May her gentle soul rest In peace.”

On September 23, 2006, he began his senior career in Slovenia when he signed with Drava Ptuj from the Slovenian PrvaLiga and was there for four years.

In March 2013, Ogu was called up to the Eagles for a 2014 FIFA World Cup qualifier and debuted against Kenya where he was used as a substitute to replace Victor Moses.

He has been able to play 26 games for the Super Eagles since 2013 scoring only one goal. Earlier, Legit.ng had reported how Premier League side West Brom are considering to sign Super Eagles captain Ahmed Musa this month in order for the Nigerian to help their quest of escaping relegation to second tier. 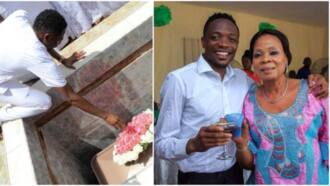 Sam Allardyce and his wards have not been finding it rosy this term in the Premier League and they are currently occupying 19th position on the table with just two wins after 19 games.

Since leaving the Saudi Arabian League last year, Ahmed Musa has been with his family and friends in Jos and he is preparing to join another club.

According to the report, Ahmed Musa is expected to team up with West Brom on Monday, January 25, and the former Leicester City striker will train with the side for a week before any deal can be done.