– In his first day in office, the US president signed 17 executive orders in a spirited move to undo some of the actions of his immediate predecessor, Trump

– Among others, Biden signed executive orders on mask mandate, Trump’s border wall, travel ban, and so on

The president of the United States, Joe Biden, has reportedly signed 17 executive orders right after his inauguration on Wednesday, July 20, to undo some of the things put in place by his controversial predecessor, Donald Trump.

CNN reports that the 46th US president is signing a flurry of executive orders, memorandums and directives to agencies. 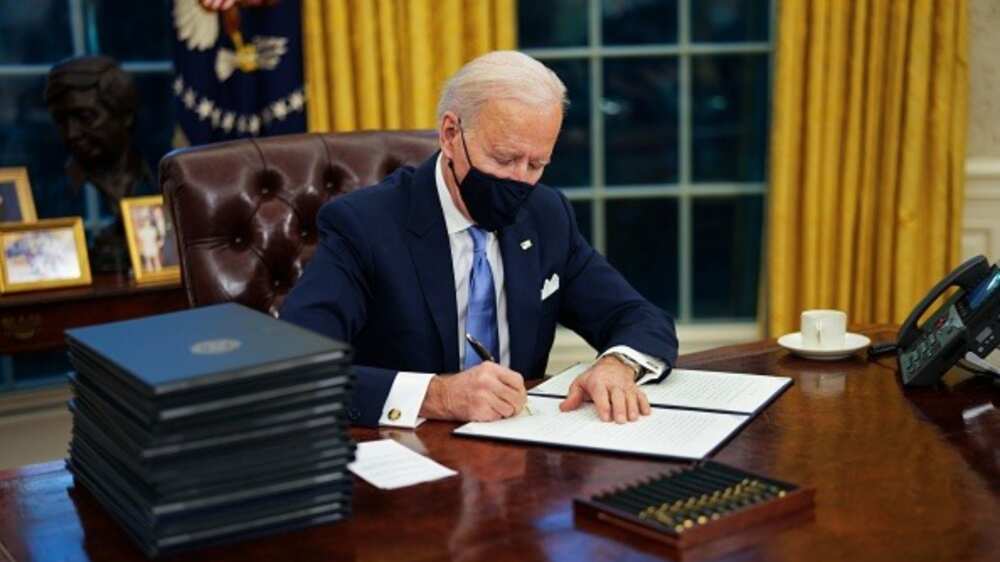 US President Joe Biden signs an executive order on COVID-19 and other policies in the Oval Office of the White House in Washington, D.C. on Wednesday, January 20, 2021. Photo credit: Doug Mills
Source: Getty Images

He said as he started signing the executive orders:

“I’m going to start by keeping the promises I made to the American people.”

With the executive orders, President Biden has stopped the funding for the construction of Trump’s border wall.

Biden by his executive actions has also embraced progressive policies on the environment and diversity that former president Trump spent four years blocking.

He also reversed several of Trump’s attempts to withdraw from international agreements, beginning the process of rejoining the Paris climate accord and halting the United States’ departure from the World Health Organization (WHO).

Legit.ng gathers that President Trump’s first executive order was to impose a mask mandate on federal property, a clear depart from Trump’s approach to the coronavirus pandemic.

Meanwhile, President Muhammadu Buhari has warmly welcomed the inauguration of Biden and Senator Kamala Harris as president and vice president of the United States respectively.

President Buhari said this in a statement released by his senior special assistant on media and publicity, Garba Shehu, on Wednesday.