– There is no crisis in Southwest PDP, a chieftain of the party in Ondo, Nicholas Tofowomo, has claimed

– Tofowomo made this claim on Wednesday, January 20

The claim that there is a crisis and unrest in Southwest People’s Democratic Party (PDP) has been dismissed by a senator in Ondo, Nicholas Tofowomo, on Wednesday, January 20.

Speaking with journalists on Wednesday, Tofowomo, said what people considered a crisis was the tension that characterised the Southwest chairmanship poll, Premium Times reports.

The senator mentioned that said the inability to honour a resolve made for Eddy Olafeso to retain his position as the national vice-chairman of PDP in the region steered up a lot of worries.

Like Trump, President Buhari will not be forgotten, Fayose says

Concerning the disagreement between Governor Seyi Makinde of Oyo and Ayodele Fayose, the PDP chieftain said it was nothing short of politics and its attendant rivalry that affect the Southwest chairmanship election. 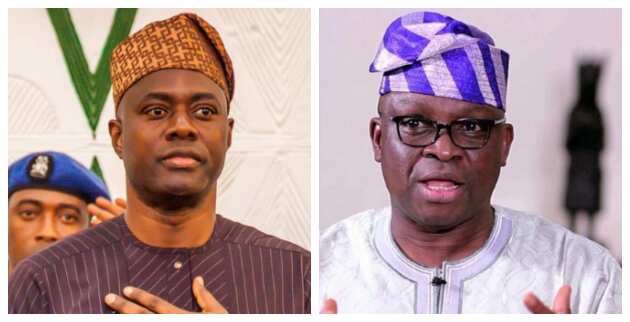 A PDP senator has said that the war between Makinde and Fayose is just political rivalry
(Photo: @seyimakinde, @ayofayose)
Source: Twitter

“Olafeso left the position to contest the Ondo governnorship primaries which, he later lost to Jegede, but it was agreed that if he loses, he will retain his position.

“But Governor Makinde, as the leader of the party in the South-West, did not want to honour that agreement and that was the reason for the feud between him, Fayose and their supporters.

“That does not mean there is a crisis in South-West PDP as being widely circulated, it’s all about politics and political rivalry because of the election, but after the election, everybody will embrace themselves and come together again.”

Meanwhile, in its efforts to tame the raging crisis over who would become the leader of the party in the southwest between Makinde and Ayodele Fayose, the PDP had assigned a new role to Bukola Saraki-led committee.

The National Working Committee (NWC) of the party noted that the crisis was a threat to its survival in the southwest ahead of the 2023 general elections.