– The reality star chopped off her hair and went bald, to the surprise of many

– Diane then shared a video of herself rocking her new hairstyle

BBNaija Pepper Dem star Diane Russet has left her fans gushing over a video she shared on her Instagram page.

In the video, Diane laid on her bed as she sang along with the song playing in the background. The video also revealed that the reality star has cut off her hair and now wears a bald look.

Meanwhile, Diane looked as beautiful as when she had a head full of hair. 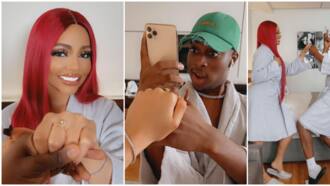 Nigerians reacted to the video and many complimented her beauty despite the change in hairstyle.

“This geh is just fine. so uncomfortable.”

“She is beautiful in and out.”

In other news, Legit.ng earlier reported that Diane planned to continue searching for a man in 2021 after her unsuccessful attempts in 2020.

The BBNaija star shared one of her goals at the beginning of the year 2020. She stated that her plan was to get a man and show him off online.

As the year 2020 came to an end, a follower of the reality star reminded Diane of her plans and how she’s been waiting to see her man. The follower, @Delfexy said she has lost weight from waiting to see Diane’s man. 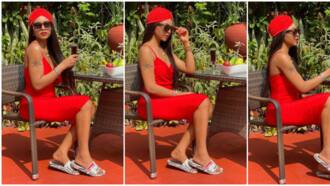 Reacting to Delfexy’s tweet to her, the beautiful BBNaija star stated that she was not able to find a man. According to her, she will continue her search in the year 2021.

Diane used a crying and praying emoji as if she is begging God to hear her prayers.

What we hate about life after BBNaija – Elozonam, Cindy | Legit TV