A young Nigerian lady with the Twitter handle @Mz_tique has bought her first car and she is very excited about it all.

In a Twitter post on Monday, January 18, the lady shared three photos showing her posing with the car which was designed in ribbons as a mark of celebration.

While many congratulated her, there were some who wanted to know her source of wealth as they insinuated that she may not have bought it with her money.

Tweeps who saw that as a slight to her gave befitting responses, saying a car is not too big for a young lady to get for herself. Her post has received over 24,000 likes and stirred an interesting conversation online on what young Nigerians have the financial capacity to afford.

“Shame on all the guys here who think it’s impossible for her to hustle this off all by herself. Y’all are just poor in mentality and finances as well! Lots of strong ladies out here working hard for fat Cheques! Only broke men with swallow dreams feel intimated with this stuff.”

“Big congratulations. But abeg no vex where una dey see this money?” 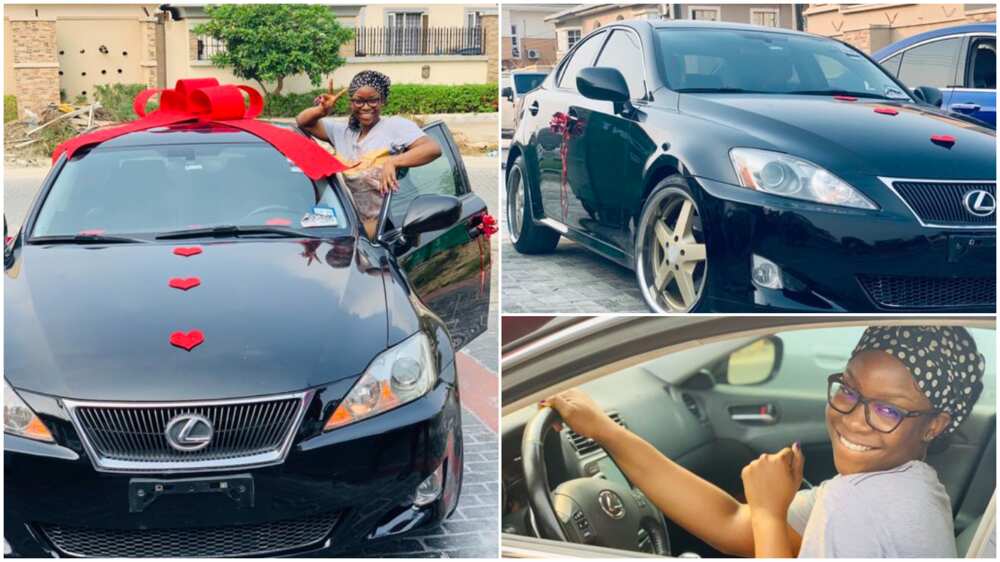 Many people praised the lady for getting a new car.
Photo source: @Mz_tique
Source: Twitter

“Congratulations dear. But abeg where you na dey see this money abeg.”

“We would have said ‘thank you’ to whoever bought you the car… But you’d rather claim to have ‘purchased’ the car yourself… The heart shapes are fine, sha.” Meanwhile, Legit.ng earlier reported that a young lady with the Twitter handle, @darkooo_ set a high standard for self-love after she finished school.

In rewarding herself for academic hard work, she bought a car. In a Twitter post, the young lady posed with the new whip.

Many people were amazed that it was not just any kind of vehicle but a Tesla. What a way to celebrate oneself indeed! The lady wore a face mask and sat on its bonnet as she raised one hand into the air.

Which will you marry; the lady who stood by you or the one who made you rich? | Legit TV