– The governor of Abia state, Okezie Ikpeazu, has said that he is not nursing any ambition of defecting to APC

Governor Okezie Ikpeazu of Abia state has declared that he and other members of the Peoples Democratic Party (PDP) would not leave for the All Progressives Congress (APC) as being speculated.

The Guardian reports that the governor insisted that he would hand over power to a PDP governor in 2023, adding that the party offers what others don’t have.

Legit.ng gathered that he told stakeholders not to panic over the rumour, saying that two chieftains of the party did so because he refused to promise them automatic tickets for 2023. Ikpeazu, who made this known on Monday, January 18, during the first PDP stakeholders’ meeting of the year in Umuahia, asserted that PDP remained the party of choice in the state.

He urged the party’s members to ensure that all hands must be on deck to consolidate on its gains and strength.

He also advised party members not to allow their personal ambitions to override the party’s interest, as the general elections were barely two years away.

Meanwhile, Legit.ng had previously reported that the gale of defection rocking the southeast chapter of the PDP could hit the Abia state as some of the party’s chieftains romanced leaders of the APC in the zone.

It was reported that the Abia state commissioner for trade and investment, Cosmos Ndukwe, said he did not owe the state governor, Okezie Ikpeazu, and the PDP any explanation for hosting Senator Kalu in his home. 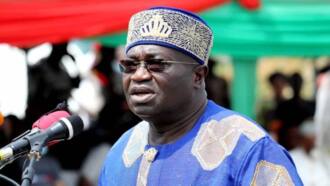 Ndukwe stated this following the controversies and reactions that trailed the visit of the senator representing Abia North and a former governor of the state, Kalu to his (Ndukwe) Akanu Item country home.

In another report, Governor Ikpeazu issued a strong warning to officials supervising the Ngwa road project.

Ikpeazu said the commissioner for works, Bob Ogu, and supervising officials would be sacked if they do not mobilise at least 10 earth-moving equipment to the site within the next four weeks.

He noted that his administration was determined to improve the quality of roads in the state, adding that the era of shoddy road jobs had gone.