– The AYCF is displeased with the activities of Nnamdi Kanu, the wanted leader of IPOB

– The group’s leader, Yerima Shettima speaks about how the southeast region’s presidential ambition is threatened by Kanu

The Arewa Youth Consultative Forum (AYCF) has accused Nnamdi Kanu, the wanted leader of the Indigenous People of Biafra (IPOB) of working against the ambitions of the southeast region to produce the next president.

Yerima Shettima the leader of the AYCF, made the accusation during an interview with The Sun newspapers. 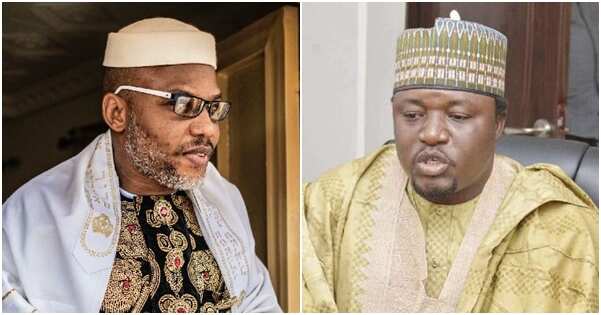 Yerima Shettima says Nnamdi Kanu is trying to cause a crisis in the country.
Photo: Africanews.com, Vanguard
Source: UGC

He said Kanu’s threats to the unity of Nigeria is harming the hopes and ambition of the southeast region to govern Nigeria.

Yerima urged people from the region to show determination that they indeed want the presidency by condemning IPOB’s activities.

“First is that the South-East geopolitical zone must be determined and more focused. I have said several times that they cannot allow one person to continue threatening our unity in a country where we are still struggling to build a nation…”

“The South-East must begin to demonstrate that because this Nnamdi Kanu is working to scuttle their hopes and ambition.”

The youth leader stated that the IPOB leader recently formed and armed a militant group under the guise of setting up a regional security outfit.

He said Kanu as a leader of a group that has been constitutionally proscribed lacks the constitutional right to form a security outfit.

Shettima noted that it is important for Nigerians to apply equity and ensure justice for all to avert another crisis in the country.

Meanwhile, a group, Coalition of South East Professionals Network in Nigeria and Diaspora (CSEPNND) has called on the federal government to repatriate Nnamdi Kanu, to face a case of an alleged treasonable felony.