Two chieftains of the All Progressives Congress (APC) have recommended Governor Yahaya Bello and Governor David Umahi as the best politicians to rule Nigeria in 2023. 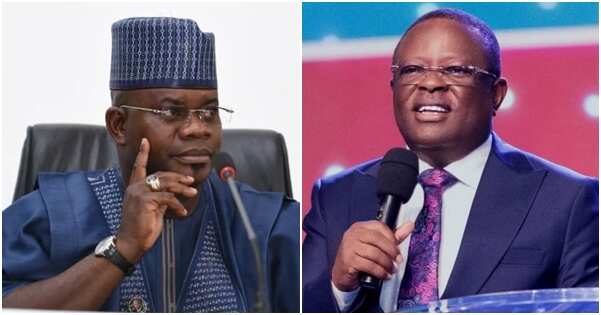 Both men at a political meeting in Ebonyi state argued that Bello and Umahi have the required experience for the presidency.

According to The Punch, the speaker of Kogi Assembly advocated for the presidency to be zoned to the north-central and southeast regions.

Kolawole stated that both regions were the most marginalised since the return of democracy in 1999.

He said Nigeria stands to benefit largely with Bello as president and Umahi as vice president.

On the other hand, Francis Nwifuru who heads the Ebonyi Assembly pleaded with the APC to zone its presidential ticket to the southeast region.

According to him, if the southeast gets the ticket, Umahi should be supported to rule the country, while Governor Bello can be his vice president.

In another news, a northern group under the auspices of CITAR NGO on Sunday, January 17, vowed to drag the governor of Kogi state, Yahaya Bello, to court if he decides not to grant the movement’s pleas of contesting the presidential seat.

The CITAR N.G.O spokesman, Hayatu Girie, made this known in a statement after the group’s meeting in Kaduna state, amid heightened conversation over who succeeds President Muhammadu Buari in 2023.

According to Girie, the group has started consulting the elders and religious leaders across the six geopolitical zones on how to compel the governor to join the presidential race, Leadership reported.