– Pence in a tweet on Sunday, January 17, explained that this was the first time in decades

With less than two days to the expiration of Donald Trump’s tenure, the administration of outgoing US President has made history.

According to Vice President Mike Pence, the Trump-led regime is the first in decades not to get the country entangled in a new war.

Pence who made the disclosure in a tweet on Sunday, January 17, express how proud he is of the current regime. Unfortunately, the vice president’s claims didn’t sit well with other Americans as they were quick to point out other areas where the outgoing administration failed.

In some of the comments sighted by Legit.ng, critics pointed out that Trump is currently in a losing battle with the coronavirus pandemic.

“And yet more Americans will have died than in almost any other war in the history of the United States.”

“In one sense your right. You refused to go to war against a pandemic and we are losing. You abandoned allies(not a sign of strength) and started a war right here. OUR CAPITOL and most of DC is the new Green Zone. A disgraceful legacy. So much for peace.”

Others stressed the invasion of the US Capitol by Trump supporters.

“Are you trying to ignore the war within America? That’s a pretty big one you got going.” 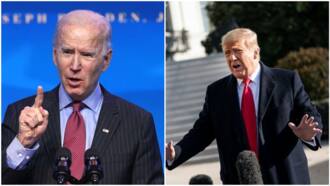 “Some constituents feel there is a new war on the domestic front following what happened January 6.”

“Peace, War and Strength? I guess you chose to side step all the violence that has occurred in the past four years? And what about the Civil War that is now going on here in our own country? Strength? We are so divided right now that our enemies are licking their chops!”

The vice president’s statement is coming almost a week after Trump was impeached by the US House of Representatives led by Speaker Nancy Pelosi for the second time in two years,

Trump was impeached after he incited his followers to attack the capitol in an effort to stop the certification of Joe Biden’s presidential election win.

The Democrats alongside some of their Republican colleagues voted to impeach the controversial president on allegation of “incitement of insurrection”.

Meanwhile, Legit.ng reported that President Trump spoke after his historic second impeachment by the United States’ House on Wednesday, January 13.

The US president ignored his impeachment in the speech as he focused only on the violence at the US Capitol.

Trump condemned the violence, adding that such an incident does not have a place in the US and in his political movement.