German champions Bayern Munich on Sunday, January 17, continued with their impressive performance this term in the Bundesliga after beating Freiburg in a tough game.

Man of the moment Robert Lewandowski scored the first goal for Bayern Munich in this encounter in the 7th minute after receiving a great assist from Thomas Muller.

The Polish striker has however broken the goal record of Thomas Muller’s 20th-goal in the first half of a single German top-flight term.

Robert Lewandowski is now having 21 goals so far this season in the German Bundesliga and the 32-year-old is also leading the goalscorers’ chart in Europe.

Should Robert continue this way with his incredible form for Bayern Munich, then the Polish is expected to beat Cristiano Ronaldo and Lionel Messi for the Ballon d’Or award this year.

French Football Magazine who are the organizers of the Ballon d’Or decided not to hold the Gala night last year due to the disturbances COVID-19 caused to football in the whole world.

Despite that, Robert Lewandowski won FIFA’s The Best Men’s Player award for 2020 after helping Bayern Munich to win three titles in a season.

Meanwhile, Bayern Munich are currently topping the Bundesliga title with 36 points after 16 games played this term and they could be going for another title again. Earlier, Legit.ng had reported how there were incredible scenes at the Holstein-Stadion after second division side Holstein Kiel knocked Bayern Munich out of this season’s German Cup.

It becomes the first time since 2004 that the defending champions got knocked out of the competition by a team in the lower division and the celebrations went haywire. 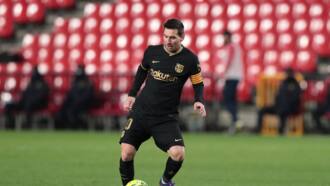 The loss means Bayern Munich have now lost more games in year 2021 than they did in 2020, despite that it is just January.

But it was a hard-fought bout for the hosts to overcome the Bundesliga reigning kings after Serge Gnabry has opened the scoring as early as the 14th minute.

Holstein stunned the visitors just before half-time as they dug deep and Fin Bartels drilled home to equalise 1-1.