– Lionel Messi could be handed an additional two games ban

The 33-year-old failed to lift his first title in 2021, he was also off for the first time after getting violent with Asier Villalibre in the game. While that was the fourth red of his professional career.

Antoine Griezmann scored two goals but they ended up mere consolations after Inaki Williams’ 94th-minute strike propelled his side to victory in the extra minutes.

However, the problem seems unending for the Argentine who might be facing a four-match ban owing to his attitude in the game. 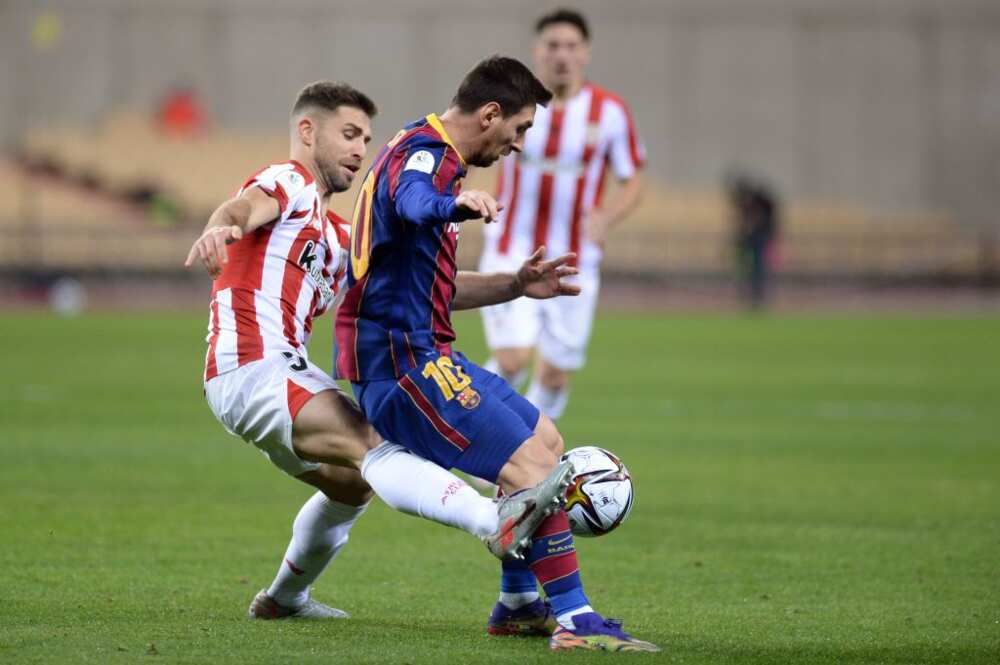 Lionel Messi trying to shield the ball from an Athletic Bilbao player during their Super Cup clash over the weekend.
Photo by CRISTINA QUICLER/AFP
Source: Getty Images

Sources claim the Royal Spanish Football Federation’s competition committee will meet later this week to decide the length of his suspension as reported by 90 Mins.

The six-time Ballon d’Or winner’s ban will start when Barcelona battle Cornella on Thursday, as well as their La Liga outing Elche next weekend.

Messi had no hand in his side’s two goals and this could continue if he gets an extended ban at the end of the week.

Meanwhile, the Argentine has scored 14 goals and six assists in 22 appearances across competitions for the Nou Camp side.

Legit.ng earlier reported that Lionel Messi has been shown his first-ever red card in the colours of Barcelona as the Catalan giants were beaten 3-2 in Spanish Super Cup final.

It was the Argentine’s 753rd game for the club, however, it was not his first-ever career red card in a game which stretched into extra-time.

As the match approached the closing stages, Messi’s path was crossed by Asier Villalibre and it took the six-time Ballon d’Or winner a push to take the player off the way.