– As universities across Nigeria plan to resume after the prolonged strike which ended in December 2020, Plateau State University has embarked on another one

– The ASUU chapter of the university listed insecurity, poor infrastructural development, and non-payment of arrears of earned allowances as the reasons its decision

– Dr Pamson Bentse, chairman of the ASUU chapter, said the lecturers have been pressing for their demands for three years but no one listened

The Plateau State University chapter of the Academic Staff Union of Universities (ASUU), has commenced an indefinite strike action.

The News Agency of Nigeria (NAN) reports that the ASUU chapter said it embarked on strike due to insecurity, poor infrastructural development and arrears of earned allowances for its members amounting to over N215 million.

Legit.ng gathers that Dr Pamson Bentse, chairman of the union in the university, disclosed this on Friday, January 15, in Jos. He said the decision to proceed on strike was reached after its congress meeting, held at the University’s main campus, in Bokkos.

Bentse explained that the union had been pressing for these demands for the past three years, but nothing had been done to address them.

He also complained about the absence of a Governing Council in the university in the past year, saying it is not healthy for the growth of the institution.

Bentse added that students are not safe on the campus because the university is not fully fenced.

“We have pushed for these demands for the last three year, but it fell on deaf ears and this afternoon, with the approval of our National Executive Council (NEC), we declared an indefinite strike.”

Meanwhile, Nigerian university teachers have accused the federal government of reneging on the agreement reached with ASUU. 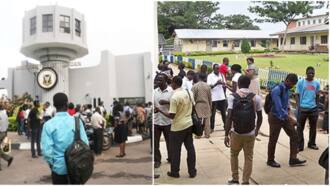 The allegation came a few weeks after the lecturers suspended their nine-month-old strike.

In a statement sent to journalists, ASUU noted that the government was yet to pay their December salaries, while “illegal” deductions were still to be refunded.