– The Chelsea boss believes his No.11 will bounce back in confidence and insisted he was delighted with his pace

Timo Werner missed a sitter and Chelsea boss Frank Lampard has advised the German striker to keep working on the training pitch to get those kinds of chances converted.

The 24-year-old has not scored for Chelsea in the last 12 matches until the FA Cup win over League Two side Morecambe.

The Germany international was brought on in the second half in the west London derby against Fulham but failed to find the back of the net. 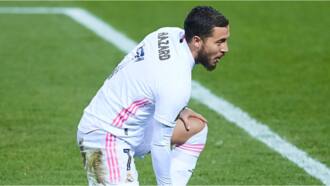 During the closing stages of the match, Werner was given a through ball by mason Mount as he was one-on-one with Alphone Areola but his shot went off-target.

However, Lampard believes the £47.5million summer signing will get his confidence back and insisted he was “delighted” with Werner’s incisive running.

“I think it’s normal, I think if you don’t score as regularly as you want, he scored last week in the FA Cup.

“But those are goals I’ve seen him score many a time. His bread and butter is going through like that and scoring and it happens.

“He has to just keep working, it’s the only way out of it. We’ve all been there if you’re a goalscorer or a striker.

“Everyone will say the same, get back on the training pitch, [be] pleased you’re getting in there, go again. “It’ll go in for him because he’s high quality. I was delighted to see him to get through [on goal].

“He likes to be in those positions, we’re getting him in positions there when he came on and he will score.”

Meanwhile, Legit.ng had earlier reported that Chelsea got back winning ways at Craven Cottage following their 1-0 win over London neighbours Fulham.

Mason Mount got the only goal of the match to ease the pressure off Frank Lampard and keep their title hopes alive.

The west London derby was packed with action as both sides stood toe-to-toe against each other in the entertaining fixture.