Nigeria Professional Football club Rangers international have paid tribute to their late player Ifeanyi George a year after his death.

The forward died through a ghastly motor accident along the Asaba-Benin expressway while travelling to Lagos from Enugu last year.

He was in the car with two other passengers when their vehicle collided into a stationary truck on Sunday, March 22.

The Flying Antelopes as they are fondly referred to have now taken out time to remember their player at the exact spot the incident happen. 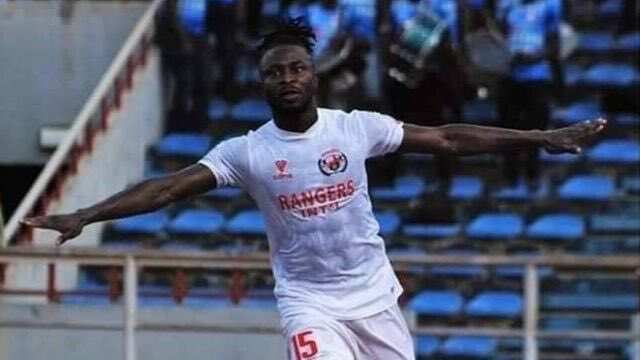 Ifeanyi George celebrating one of his goals for Enugu Rangers during his time with them. Rest on star player.
Credit – Twitter @communeamos
Source: Twitter

Rangers players and members of staff gathered to observe a minute silence for the departed and said a few prayers before continuing their journey to Lagos. The team posted on their Twitter handle:

“We stopped over at d spot (Evbobanosa) junction along Asaba-Benin road where our late attacking sensation, Ifeanyi George, breathed his last just few days to mark the first anniversary of his death to observe a minute silence with prayers for the repose of his soul on our way to Lagos.”

The seven-time NPFL champions have a meeting with Lagos-based MFM FC at the Agege Stadium this weekend as the race to win the title continues this term.

Coach Gbenga Ogunbote’s men are currently joint log leaders with Rivers United on the table with nine points each after four rounds of games and they will be hoping for maximum points in Lagos to honour their late striker. Rangers only defeat so far this campaign was against the Port Harcourt based team at the start of the season with Omoniwari Fortune scoring the only goal of the game in the 29th minute.

Legit.ng earlier reported that football family in France have been thrown into deep mourning following the untimely death of former Bastia winger Christopher Maboulou who died after suffering a heart attack.

Christopher Maboulou who played 29 games for Bastia scoring three goals in the topflight was reported to be having a kick-about before he suffered the attack.

According to the report on UK Sun, the 30-year-old was enjoying himself in a friendly game before he collapsed on the pitch before he was rushed to the hospital.