Nigeria’s Golden Eaglets progressed to the final of the WAFU U17 Cup Tournament in Lome following their 1-0 win over Group A winners Burkina Faso at the Stade Kegue on Friday, January 15.

Michael Emmanuel Papo fired coach Fatai Amoo’s side to the last stage of the championship with his 77th-minute strike despite their slow start.

The victory means the five-time world champions would have a chance to contend for the silverware on Wednesday, January 20.

They have also qualified for the 2021 Under-17 Africa Cup of Nations championship staging in Morocco from 13th – 31st March. 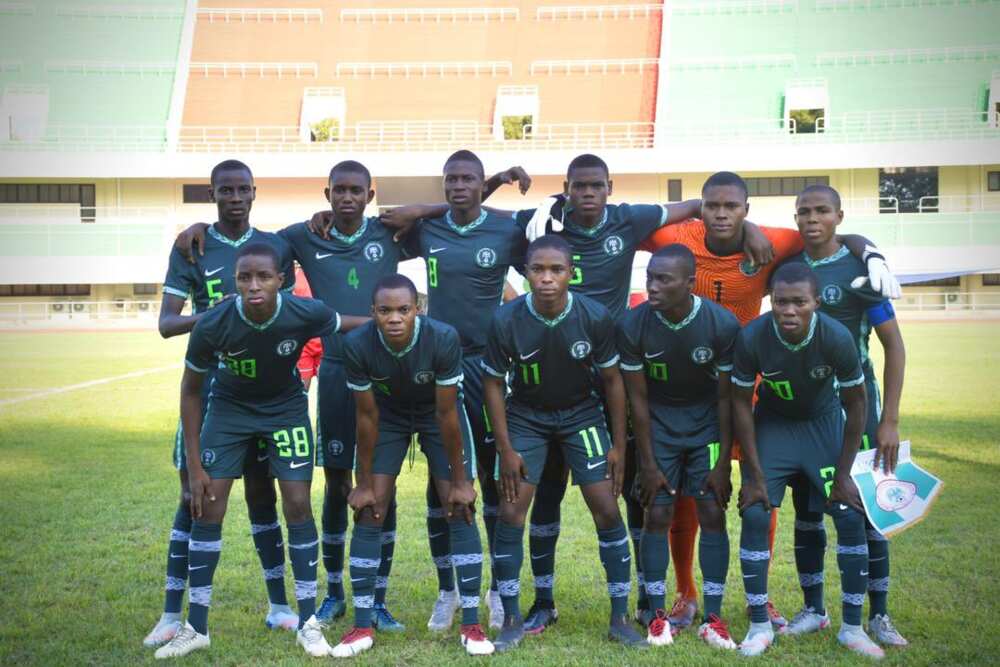 Nigeria U17 national team line up ahead of their WAFU U17 semifinal clash vs Burkina Faso.
Credit – NFF Twitter page.
Source: Twitter

Fatai Amoo’s boys started the competition on a shaky note after losing by the odd goal to Cote d’Ivoire but only managed a 1-1 draw by Ghana in their second game in the three-team Group B.

They looked to be on their way home until Cote d’Ivoire trashed Ghana 3-1 to allow the Eaglets slip into the last four.

Nigeria’s opponents in Wednesday’s final will be the winner of Friday’s second semi-final clash between Cote d’Ivoire and Niger Republic.

Legit.ng earlier reported that former Super Eagles goalkeeper Ndubuisi Egbo has made it clear that Nigeria were not prepared to play penalties against Cameroon at AFCON 2000 final.

The 2000 African Cup of Nations championship was hosted by Ghana and Nigeria in which the Super Eagles were impressive before losing against Cameroon in the final.

In the final of the 2000 AFCON, Samuel Eto’o and Patrick Mboma put Cameroon ahead with two superb goals before the Super Eagles came back with strikers from Okocha and Raphael Chukwu.